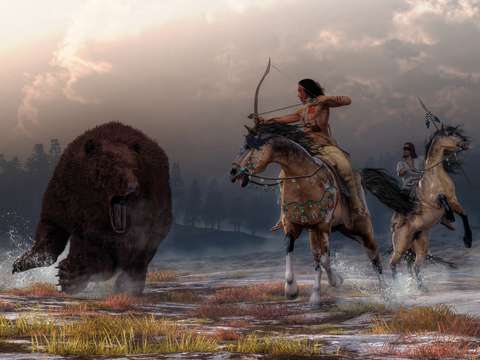 This is a scene from the Blackfoot story "The Bear Woman". In the story, a woman refuses to get married, much to the consternation of her family. One day, her little sister follows her into the wilderness to spy on her and learns that she has taken a bear as husband. She tells her father and brothers who then find and kill the bear. Later, the Bear Woman gains the ability to transform into a bear herself. After slaughtering her village, there is a chase between her and her brothers who eventually kill her, but, having no people to return to, they ascend to the skies and become the stars of the great bear constellation.

The part of the story I've depicted here is near the end where the brothers clash with their sister who has taken her bear form. Two Native American warriors on the backs of mustangs encounter a massive brown bear on a snowy field under cloud filled evening skies. The lead hunter draws back his bow and takes aim from galloping mount, while the other holds aloft his lance as his horse rears. The bear charges savagely, kicking up a shower of powdery snow as it roars in anger.