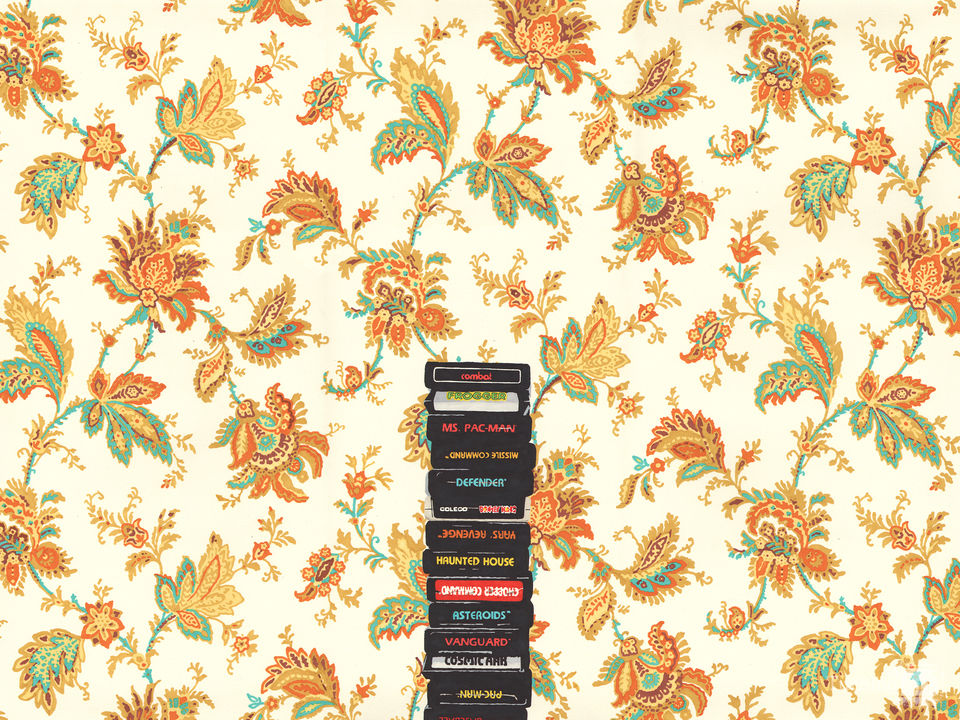 Atari (Flower Wallpaper) is a permanent marker drawing on paper, using a collection of old Atari games from my childhood collection. In my work, erasure, fragmentation and simplification represent the imperfect, limited nature of memory and the constant notion of flux we experience in an increasingly digital world. In many cases, I want to create incomplete templates, scenarios that serve as blanks to fill in, rather than specific individuals or events. The constant tech evolution is one of contemporary society's main themes, something I’ve experienced throughout my life. Pixelation and computer manipulation represent the merging of the physical and digital reality, while the people in the images and those old things that were once so important, represent how quickly things change.

Other works by Hollis Brown Thornton

Thornton moved to Chicago in August 2001, taking employment as a gallery director at "Mongerson Gallery":http://www.mongersongallery.com (3 1/2 years) and Assistant Preparator at "Russell Bowman Art Advisory":http://www.bowmanart.com (2 years). His relationship with the "Linda Warren Gallery":http://www.lindawarrengallery.com/ began in the spring of 2004, which continues to this day. While in Chicago, it became apparent that the South was a significant aspect of Thornton’s work and it ultimately drove him to return home. Since August 2005, Thornton has been working out of his warehouse studio in Aiken, SC, as a full time artist.

As of August 2005, Thornton has been working out of his warehouse studio in Aiken, South Carolina, as a full-time artist. In April 2011, he and his wife opened the contemporary clothing boutique, "Threads":http://www.ilovethreads.com in downtown Aiken.