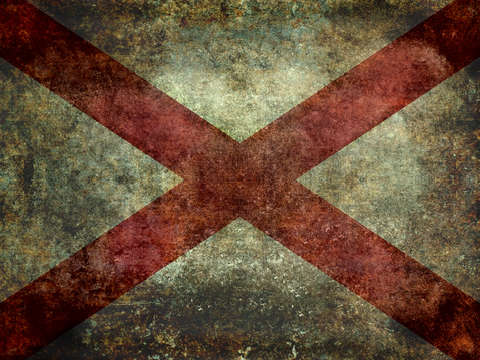 It is sometimes believed that the crimson saltire of the current flag of Alabama was designed to resemble the blue saltire of the Confederate Battle Flag. Many battle flags were square, and the flag of Alabama is sometimes also depicted as square. The legislation that created the state flag did not specify if the flag was to be square, however. The authors of a 1917 article in National Geographic expressed their opinion that because the Alabama flag was based on the Battle Flag, it should be square. In 1987, the office of Alabama Attorney General Don Siegelman issued an opinion in which the Battle Flag derivation is repeated, but concluded that the proper shape is rectangular, as it had been depicted numerous times in official publications and reproductions; despite this, the flag is still depicted as being square, even in official publications of the U.S. federal government.
The Spanish Cross of Burgundy, used in southern Alabama until the 1800s.
The French royal standard, used in western Alabama until the 1800s.
However, the saltire of the Alabama's flag most closely resembles the saltire of the flag of Florida, which has its heritage in the Spanish Cross of Burgundy. Southern Alabama was originally part of Spanish Florida and subsequently West Florida. Although Alabama's adoption of its flag design predates that of Florida's by five years (1895), the 1868-1900 Seal of Florida depicted a white flag with a red saltire, similar to Florida's current flag or a Burgundian saltire, on top of a steamboat. Furthermore, Alabama's legislation describes its red saltire as St. Andrew's cross. The Cross of Burgundy represents the cross on which St. Andrew was crucified.