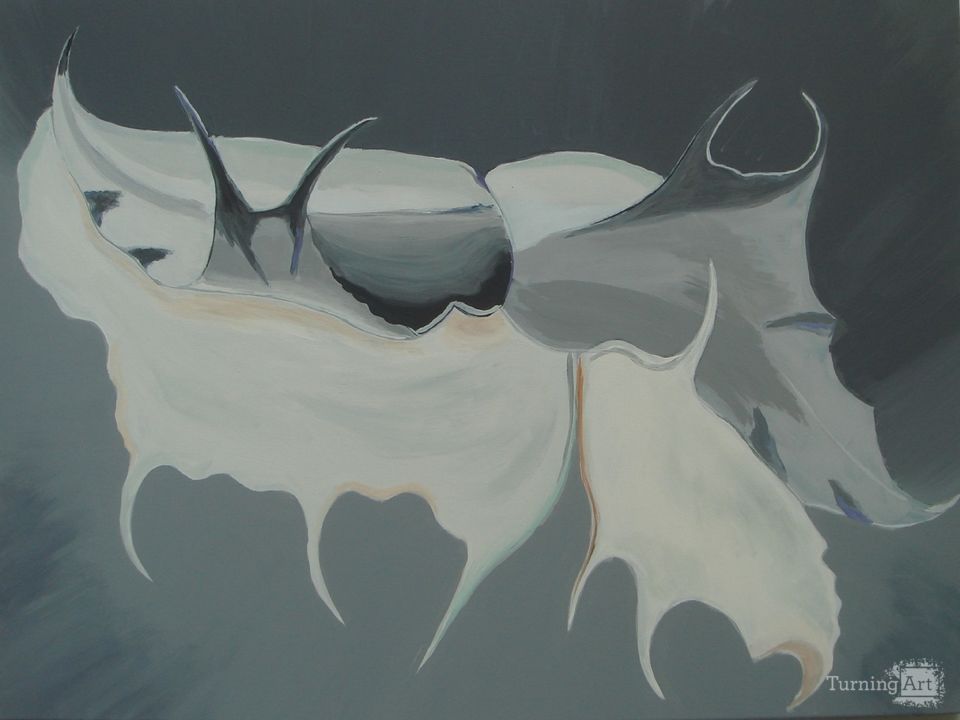 The interplay between abstraction and representation frequently surfaces in my work. Depicting an object in a new manner, or from a different perspective, such that it ceases to be itself and instead takes on a new form, is a type of alchemy. The finest examples are those that straddle the fine line between abstraction and representation in such a way that a small change, perhaps just a brushstroke, moves the image across the boundary from one to the other. Often I enjoy examining an everyday object in very close proximity, and appreciate the fine patterns or forms contained within it- the veins in a leaf, the meniscus around a floating plant. Other worlds full of mysteries and depth, but so easily overlooked. They are a large part of my appreciation of the natural world in my urban environment, reminding me that my own habitat, as familiar as it seems, is full of the exotic and the unknown.

I am influenced by the processes of nature while I create my paintings. Using glazes and gel media, I build an image in layers, each one influenced by those that came before it. Underpainting is sometimes exposed, and I am reminded of the wounds on an old tree, or the scars where topsoil has slid down a hillside, exposing a bit of history for anyone who cares to observe it. I think about far-away coral reefs and familiar forests, built through natural cycles of growth and decay, layer upon layer, the patterns and forms of the living directly descending from the older layers beneath them.

Other works by Josh Schechtel

Born and raised in New York state, Josh Schechtel painted and drew from the time he was old enough to hold a crayon. He pursued drawing, painting and ceramics, but left his art studies behind after graduating high school. Throughout college and for many years afterwards, his art consisted of handmade collaged greeting cards for family and friends. His work and studies took him around the country and overseas, and eventually to San Francisco.

After nearly 25 years, Josh decided that his painting could no longer remain dormant, and he began studying in the Fine Arts Department at UC Berkeley Extension. He has also studied at San Francisco City College and the Mendocino Arts Center, and his instructors have included Eva Bovenzi, Linda Hope and Robert Burridge.

Working in acrylic on canvas and paper, Josh paints work based on several themes, including the topography of San Francisco, streetscapes, and natural forms. His streetscapes examine the intersection between nature and the structures of our society, and how this creates a unique sense of place. In his studies of natural forms, he often examines an everyday object, such as a leaf, in very close proximity, appreciating the fine patterns or forms contained within it. His paintings have become more abstract over time; the result of his focus on the elements that create a mood or emotional response. Nonessential details are removed, the rules of perspective are minimized, and the result is a group of colored planes, interacting to create an atmosphere without necessarily containing any recognizable features. Mood is depicted through the use of color, line and abstract form, without strongly defined positive and negative spaces, leaving room for interpretation by the viewer.

Josh maintains a studio in the Mission District of San Francisco, and has only recently begun to exhibit his paintings.