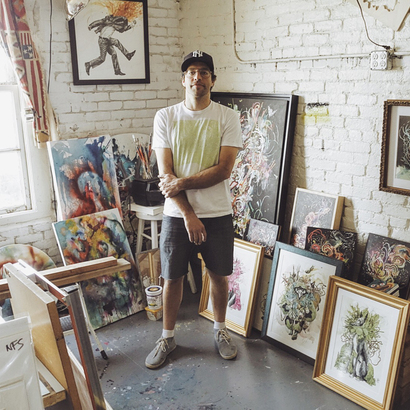 ZACH JOHNSEN is a multidisciplinary artist and designer, working both in the commercial sphere and fine art world. He works in graphite, watercolor, pen & ink and acrylic on mostly 2D surfaces and by far his most trusted medium is the micron pen. He uses them exhaustively to describe an ever-expanding natural world of hidden spirits, ghouls, monsters, and misfits. His work is frenetic and chaotic, an explosion of lines and color influenced by infomercials, cartoons, sweets and the over-consumption of popular culture. Zach has lent his unique style of frenetic pen lines, jumbled character piles and explosive color to a variety of applications. He has worked with MTV, K2 Snowboards, ESPN, Arbor Collective, Nike, Gnu Snowboards, Icon Motosports, Slingshot Wakeboards, Bulleit Bourbon, Sony/BMG and more. His fine artwork has been displayed across the US, in Australia, Copenhagen, Japan and the UK. Zach currently resides in the Great North Woods of Northern NH where he designs and creates art every day.


Other works by Zach Johnsen