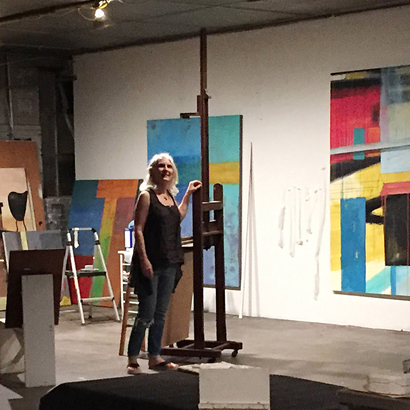 Susan Morrison-Dyke graduated with a BFA from The School of the Museum of Fine Arts and Tufts University and received the James William Paige Traveling Scholarship, a prestigious 5th Year graduate program award. She was later awarded the Clarissa Bartlett Traveling Fellowship for Alumni at The School of the Museum of Fine Arts. Both awards allowed her to travel the world making a permanent impact on her work. Susan was highly visible in Boston’s explosive cutting-edge art scene, where she was represented by Stux Gallery in both Boston and New York. She later moved to New York and eventually to her hometown of Oklahoma City before coming back to The Fenway Studios to live and work in Boston. Her large-scale paintings have been featured at the Institute of Contemporary Art, Museum of Fine Arts in Boston, Aldrich Museum, Danforth Museum, Provincetown Museum, Berkshire Museum, Brockton Museum, Harvard University, Tufts University, and Boston College among many other galleries and universities throughout the country. Major Public art commissions include New York’s MTA Arts for Transit Subway Murals pending construction at Borough Hall Station in Brooklyn and Metropolitan Area Project Murals at Bricktown Ballpark (inspired by Boston’s Fenway Park) in Oklahoma City.