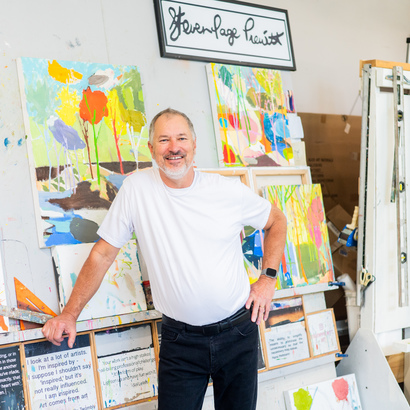 Steven’s Journey to becoming an Artist

Though creative in many ways, no one in Steven’s family practiced art or played music. Steven’s mother, Page, was – and still is – an avid, accomplished seamstress and novice home decorator and artist. She has a keen eye for color, textures, fabrics, antiquing, and furniture placement as-well-as creative cooking. Other than typical school art classes, he was not around or exposed to many artists. His first introduction to seeing ‘creatively’ was when he was a 7-year-old camper at Alpine Camp for Boys in Alabama. His camp counselor was a photographer who set up a darkroom at Alpine and taught the basics of photography, darkroom chemistry, and critical seeing to the campers. Steven attended a private prep high school where the academics were challenging, and the emphasis was on math, science, language arts, and history. As a student at the University of Mississippi, Steven was greatly influenced by three of his fraternity brothers who later became successful graphic designers and nationally recognized art directors. Steven would skip his own studies to sit with his friends while they created magic on paper in front of him. A turning point in his life was when one brother, Patrick, told Steven to “quit bothering him and go take some art classes yourself’’.

Steven’s art journey started the next semester as he was freed from the confines of conventional business and liberal arts studies to art studio classes, drawing in The Grove, and generally getting around campus with drawing pads instead of business books.
While at Ole Miss, a friend told Steven about an art school in Florida on the beach. He instantly became interested and began a 16-month journey of applying to, visiting, and enrolling in Ringling College of Art and Design in Sarasota, Florida as a Graphic Design major.

At Ringling, Steven excelled as he gained more and more confidence and his seeing and drawing skills improved. YES, Steven believes artistic skills can be learned, honed, and improved. No, he does not believe someone is either born ‘with talent’ or ‘with no talent’. In his case, Steven started art ‘late’ in college, but a spark of desire quickly became a flame. A giant confirmation and confidence boost came in his second year at Ringling when he took a printmaking class under Rob Reedy. His first critique in that class was wildly successful. Rob encouraged Steven and became his mentor and motivator. Another grand confidence boost for Steven came at the end of the semester when Louis Benito Advertising of Tampa came to Ringling to choose one student’s piece for their annual company Christmas Card. Even though he was not a senior student, Louis Benito chose one of Steven’s prints as their chosen design. The firm came to Steven’s class and presented him with a $400 check to purchase the print and use the printing rights. By the next semester, Steven switched into the Fine Arts department at Ringling. Steven graduated in 1988 with Honors and received a BFA in Fine Arts. At the end of his time at Ringling, Steven was awarded the Best of Ringling for Fine Arts from his professors and teachers. It is the highest honor the school gives.

After Ringling, Steven moved back to Mississippi with his wife, Janie, and set up a screen-printing business in his garage. He also continued making prints and had a busy, successful career selling work via various art representatives in and around the San Francisco Bay Area, from Salinas to Napa to the Yosemite Valley and Tahoe. He also spent 2 years as a traveling artist to various art fairs throughout the Southeastern US. He attended Kentuck Festival in Tuscaloosa AL, St. Augustine Art and Craft Festival, Great Gulf Coast in Pensacola, Sarasota on St. Armands, Street Fest in Charlotte, Blowing Rock Art in the Park, Jubilee Jam and Mistletoe Marketplace in Jackson, MS among others.

Steven and his family moved to North Carolina in 1992, where he and his siblings opened restaurants. He and Janie live in the Blue Ridge Mountains on 4 acres in the woods. He has consistently maintained his studio and displayed his work at his restaurants. Over the years Steven has been able to consistently place his work through sales off the walls of his restaurants, one-on-one studio visits, and through designers. He has remained a student of learning and taken several workshops with renowned artists and teachers including Bob Burridge, Joe Miller, James P. Kerr, Tim Ford, Leigh Gusterson, Mary Bentz Gilkerson, and Gina Brown.

After a 2016 workshop with Gina Brown, Steven has been exclusively making oil paintings on canvas.

Steven’s approach to painting is rooted in modern art history. He enthusiastically looks at art from the Impressionists of the 1860s to the current work of practicing artists. His approach is a dynamic amalgamation of his love of modern art influences like Matisse and Diebenkorn with his love of nature, the weather, the seasons, and the changing sunlight throughout the day. Upon watching a film of Robert Motherwell, Steven agreed with the notion that it is important to work in Series – mainly as a continuation of ideas from one canvas to another. He often looks at earlier paintings of his for inspiration. Steven often uses his iPhone or iPad as a digital ‘sketch book’ to study croppings of previous paintings for inspiration of design, color, value, shapes, etc.

Steven always mixes colors on already-stretched canvases that later become starts for new paintings. As he builds layers of a painting, he reacts to shapes, colors, values, and textures already on the canvas. Whenever he looks at other artists' work, he explores the edges and the thin areas looking at the archaeology of the layers and decisions made. Steven loves the pentimenti in painting – especially the paintings of Richard Diebenkorn, Hans Hoffman, and Henri Matisse. Steven attempts to leave a path of pentimenti in his work as he changes and edits for the finality of a canvas.

As Steven considered building his studio, he spent a lot of time looking at photos of other artists working and their ateliers. His favorites are Roy Lichenstein's and Willem de Kooning’s studios. Most of the inspiration behind his studio design and layout comes from photos of Willem de Kooning in his East Hampton NY studio. Both de Kooning’s and Steven’s have double-high windows, high ceilings, and white walls that bring in lots of natural light and atmosphere. De Kooning and Steven created ‘runways’ of several steps of walking distance for viewing work from afar. On each side of these ‘runways’ are tables with various painting supplies; he has bowls of mixed paint and boxes and boxes of unopened paint tubes at the ready. Steven’s easel is a 2×4 structure built into the main wall for holding his stretched canvases. Rolling racks hold large canvases out of the way of the working space. His space is expansive and cozy at the same time. It is filled with lots of light and surrounded by woods and mountains on all sides at the end of a quiet road in the Blue Ridge Mountains of North Carolina, USA.

Steven and the Business of being an Artist

Steven is both a busy painter and a busy restaurant owner. He finds creative solutions to problems in both businesses. He knows and understands customer service and good customer experiences. Customer satisfaction, as well as employee and vendor well-being, are his best business attributes. He excels in seeing the small details and constantly striving for a better customer and team member experience in every aspect of his businesses – both restaurant and art studio. Steven understands and works every day being aware of costs, budgets, deadlines, sales, marketing, safety, retention, as well as, feeling, lighting, atmosphere, and culture. He takes into account the senses and goes to extra efforts to give patrons of his businesses a quality, enjoyable experience. Two quick examples are: his restaurants do not have freezers – all the groceries are brought in fresh, never frozen. In his art business, Steven custom-builds shipping boxes for each painting that goes out ensuring his paintings arrive safely at their new homes. He shops shipping rates to ensure his clients get the best rates possible. He always pays the shipping companies a premium to ship Carbon Neutral and he always uses recyclable materials. He intertwines creativity and work ethic into his businesses and operates his art studio with refined business traits in mind.