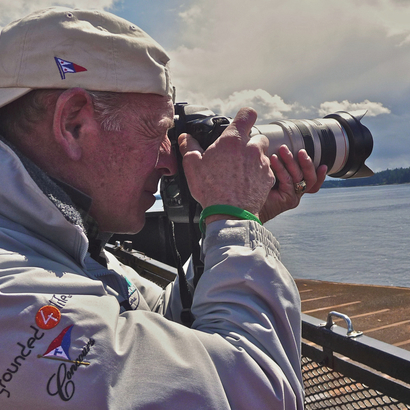 As a San Francisco native, Steve Lapkin has been blessed with the beautiful vistas and venues of the Pacific Ocean and nearby coastal and inland waters. Since childhood, Steve has enjoyed and shared a competitive sailboat racing and power boating lifestyle.

During his early regatta days with his father and brothers on San Francisco Bay, Steve was fortunate to learn of Diane Beeston, an accomplished marine photographer based in California. Diane’s prints and book of photography, Of Wind, Fog and Sail, prompted Steve to purchase his first camera body and lenses in the hope of capturing moments on the water.

Steve’s portfolio reflects the power and sail on not only San Francisco Bay and Lake Tahoe, but also Southern Florida, the coastal waters of the Pacific West Coast, the Columbia River Gorge of Oregon, and, most recently, the waters of the Puget Sound. Within Steve’s galleries you will also notice imagery from the Italian lake district, the Italian coastal area of Portofino, and Northern Europe.

Steve is also a proud and devoted owner, breeder, and handler of Labrador retrievers. As many as twenty-two yellow and black labradors have been part of his entourage since 1998.

Steve’s unrivaled niche is the antique and classic wooden runabouts dating from the early 1900s, including the iconic Thunderbird, a fifty-five foot mahogany masterpiece built in 1939 for the Lake Tahoe magnate George Whittell.

Thunderbird and other handsome watercraft have graced the covers of periodicals and catalogs such as Yachting Magazine, duPont Registry, and West Marine.


Other works by Steven Lapkin