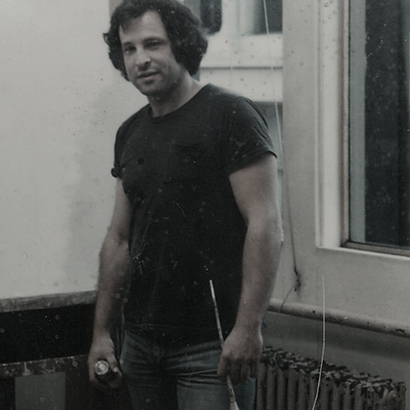 Saul Chase was born in the Bronx in 1945. He became interested in drawing and painting at an early age, finding inspiration in hidden beauties of the urban landscape that surrounded him. The elevated trains, stations and train yards, decaying industrial structures and giant signs, became the subject matter of Chase's iconic architectural paintings and silkscreen prints . Long before gentrification became fashionable, these urban images depicted a purified and cleansed city that had gone unnoticed under decades of graffiti, dirt and grime. Chase attended The City University of New York, earning a BA in Fine Art from CCNY, and a MS in Art Education, then went on to teach painting at City College (CCNY). He had numerous sold out painting shows at ACA Gallery and then Andrew Crispo Gallery in NYC and sold hundreds of prints through important print dealers like Pace Graphics and Brooke Alexander. His work is represented in major collections like the Metropolitan Museum of Art, The Smithsonian American Art Museum, The Brooklyn Museum of Art, the Yale Art Gallery, the Hirshhorn Museum and Sculpture Garden etc. The silkscreen print "Goya" was a "Print of the Decade" selection in Art News Sept. 1980.


Other works by Saul Chase