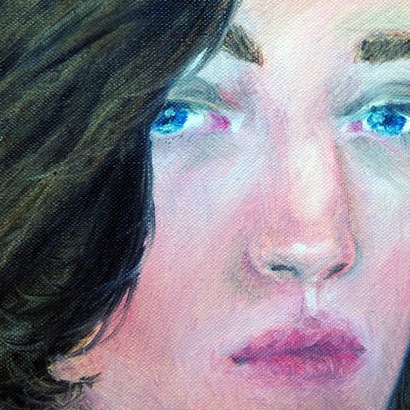 Rose Sipperley is forgetful. Forgetful in the way that she forgets everything else while she paints. She has been drawing and painting before she could even write, probably before she could even speak properly. Her family often jokes that she was born with a pencil in her hand. She grew up in Lakeland, Florida, which is a town which lies between Orlando and Tampa. There were lots of farms and orchards where she grew up, most of which are now redeveloped as suburbs.

From an early age, art was all she wanted to do. Her sketchbooks and schoolbooks were covered in art- and that got her into trouble more than a few times. Still, people saw her talent for what it was. She was recommended by a teacher to take art classes at the local Art Museum. She had never taken classes before in her life- she was largely self taught. Her family didn't have a whole lot of money, and because of the recommendation, she was able to take these classes for free.

In exchange for free classes, she continued to volunteer at the museum, where she did this for five years. Her first summer there, she learnt about Harrison School of the Arts, a local magnet arts high school. Harrison was like a fresh of breath air in a stifling, stale environment, and Rose took to it like a duck takes to water.

While at Harrison, she was in a number of shows at the student gallery, and in shows at the Polk Museum of Art. In addition to this, she participated in charity art auctions, contests for poster and ad designs, art fairs, and she attended the Pre-College program at Ringling School of Art and Design in Sarasota, Florida. There, she began to explore sculpture earnestly, and became interested in Installation Art.

She attended Florida Southern College, also in Lakeland, for fine arts. She left in the middle of her junior year to pursue other dreams- she has always wanted to travel, ever since she was a kid. She moved to another state, and still pursues her career in art. Since 2009, she has illustrated books, did the cover art for a local magazine, made a hell of a lot of paintings, worked for a photography company, and gathered her thoughts for what she wants to do in life.

As always- she wants to create art. She wants to make it accessible to those who wouldn't normally get to see it. She wants people to be able to connect to the world, instead of alienating themselves with technology.