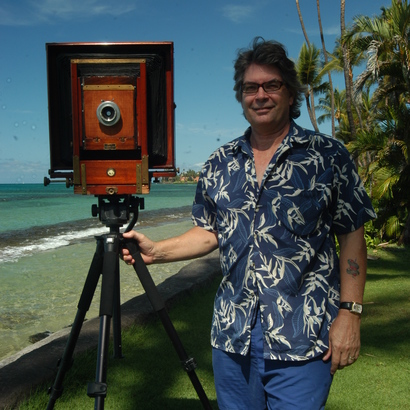 Raymond loves combining photographic images, art and imagination and watching it become a finished product that others can enjoy. He has a special fondness for large format cameras. He appreciates the deliberation and attention they demand. When he is under the black cloth, focusing on a flower or a vision of what the image will look his focus is consumed and he thinks of nothing else. He says he feels closer to God and all He created on this Earth when he is under that under that cloth.

For decades Raymond has used all four formats; 35mm, medium format 120 roll film and large format view cameras like the one shown here, as well as video, film and movie cameras. He has also published his own magazines and produced 26 half-hour TV shows and several documentaries.

Regardless of the format, finding something unique and spellbinding is his ultimate goal, whether it is a bee on a flower, a deserted beach with exposed roots of a massive tree or a salmon spawning in a shallow stream.

Take a look through the gallery and see some examples of his work and vision.


Other works by Raymond Oelrich