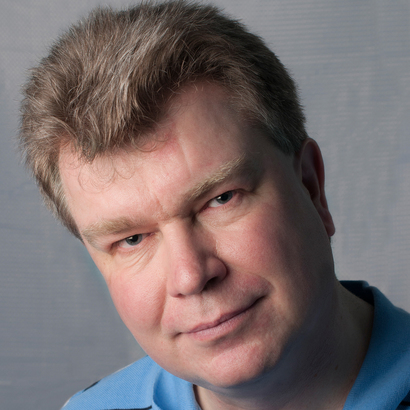 The quantum physics pioneer Enrico Fermi reportedly once said that every scientist should change fields every ten years, in order to keep a fresh viewpoint. In Philippe’s case, a transition from theoretical physics to photography was an obvious choice.

It's all about visualization, you see.

In his research, Philippe extensively used computers to solve physics problems, and he had to find ways to look at the reams of data produced by the computer simulations. In the field he used to work in, quantum ordering, visualization is quite a bit of a challenge. The quantum state of two particles is a mathematical object that lives in six dimensions (three for each particle). For three particles, it's nine dimensions. A simple carbon atom has twelve electrons and a nucleus. That's three times thirteen or thirty nine dimensions. It gets really complicated, really fast. The visualization challenge is to simplify the graphical representation enough so it can be displayed on a computer screen, while keeping enough of the information to gain useful insights into the behaviour of the system.

Superconductivity, the dissipationless flow of electric current, is an example of quantum ordering in which electrons in a metal pair up into so-called Cooper states. Nearly fifty years after their discovery, Philippe found a way to visualize the Cooper states of various kinds of superconductors, so one could see for the first time what these objects actually looked like. These graphical representations were published in the magazine Nature, which is to scientific publications what Vogue is to fashion magazines.

Much has been written about the connection between art and science. The following quote is Philippe’s favourite:

“Both art and science, at their greatest, give people a way of viewing the world. And I think this is the deepest thing they have in common”. Leon N. Cooper, Nobel Physics Laureate, 1972.

You may very well have noticed that for an Edinburgh based photographer, Philippe doesn’t really have a Scottish sounding name. There is a very simple explanation for that. He was born and raised in Lausanne, Switzerland. His path from Switzerland to Scotland was a rather convoluted one. He spent a number of years in the United States, first as an undergraduate exchange student at Carnegie Mellon University in Pittsburgh. After graduate studies at Los Alamos National Laboratory and the University of Illinois, where he got his PhD in theoretical condensed matter physics under the supervision of David Pines, he spent a couple of years as a postdoctoral research associate at the Kavli Institute for Theoretical Physics at the University of California, Santa Barbara. He then took faculty positions at the Florida State University, the University of Cambridge and the University of Edinburgh. He switched to photography in September 2012.


Other works by Philippe Monthoux