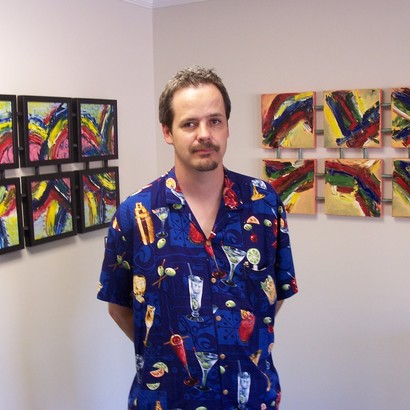 Paul Timshel was born in Oroville, California, in 1964. He demonstrated a strong interest in art at an early age. Paul began receiving recognition for his drawings in high school and was awarded a scholarship to art school upon graduating.

In addition to his formal studies, he honed and developed his design and framing skills. In time, he established his own framing business, working with artists and designers and completing large commercial contracts. He continued his studies, learning restoration techniques for antique frames, and he works on canvas, as well as paper. His many years spent working with the exacting details of framing, restoration, has birthed a desire for a new freedom of expression, as seen in his colorful abstract pieces.

Timshel paints intuitively with pure bright colors, and hopes that his work reflects images that are interpreted differently by each person. He believes that the beauty in his pieces is reflected by each viewer's individual interpretation.

After the 1995 bombing of the Murrah Federal Building, Paul was chosen to restore six 2-dimensional ceramic biblical figures for St. Joseph’s Catholic Church in Oklahoma City, More recently, he was commissioned to frame and hand-tint several McKinney and Hall antique Native American prints, as well as restore old period frames for the Oklahoma State Senate Historic Society Collections in the Oklahoma State Capitol.