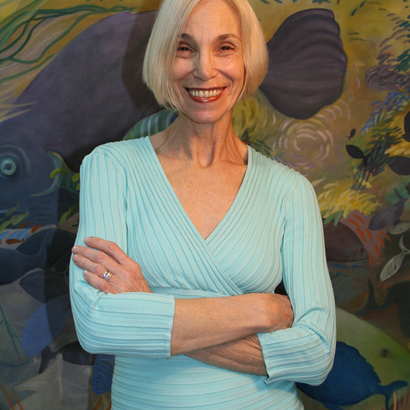 Olga Stamatiou was born in New York City on March 2nd, 1946. She began painting in 1967, at the age of twenty-one. This relatively late start to her artistic career followed the discovery of painting as a vehicle for cathartic, personal expression. At the age of eighteen, she went to live with relatives in Athens, Greece, and it was there in the heady, intellectually charged, artistically-vibrant atmosphere of the mid-1960’s that she was stirred to begin her formal artistic education, studying with the painter Ilias Dekoulakos. She remained in Greece until 1976, when she returned to the United States and embarked on further studies at Boston University’s School of Fine Arts, where she received her BFA and MFA degree in painting. She also completed a graduate program in Art Therapy at the Metropolitan College of Boston University. She lived in America for the next 20 years, exhibiting and working in the United States. In 1997, she returned once again to Greece with her husband where they live. She had exhibitions in Athens, Greece, and Nice, France.

In 2004 she started a non-profit company called Seewall Child which builds and installs interactive art based installations free of charge in crisis centers for children. Olga and her company hhavewon a 2007 Society in Arts in Healthcare Blair Sadler Award. It was said to be one of the most innovative arts projects demonstrating compelling impact on the quality of the healthcare experience for patients, their families and caregivers.

“One day, a long time ago, I retreated into my room and began to paint. It was an intuitive act, based on the need to express emotions and thoughts, and as in most actions followed by intuition, it was the best choice of my life and has become my closest companion.
Color is my passion and my main vehicle of artistic expression. I feel color so intensely that it intoxicates me. I remember when I first saw a Van Gogh painting, I salivated. The colors were powerfully rich and luscious. I was exhilarated. What an experience! Then later, after looking at a Rothko, I was transported to a different place, a quiet meditative state of beautiful inner- light experience.
Color is profoundly subliminally effective. It can elevate you to many different states and like music, it can calm you, excite you, inspire you, take away your pain, make you feel good, lift your spirits, and bring you to another frame of mind. It’s vibratory force can influence human behavior and is incredibly healing when used effectively.
Imagine a world without color. Color should not be feared but embraced, for it can reveal many amazing things to the human psyche.“


Other works by Olga Stamatiou