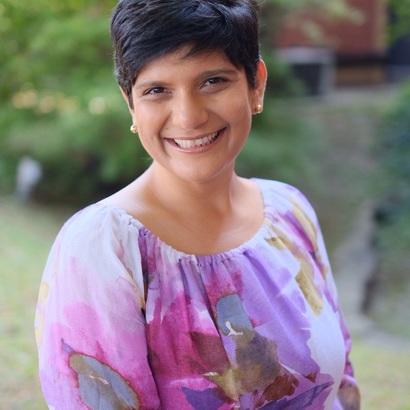 Nina Mistry is best known for whimsical and magical paintings depicting the exquisite beauty of fantastical universes and infinite dimensions of light, created on unconventional digital surfaces. Uninhibited and free of conventions Nina's work is inspired by the stars and the multiverse, epitomizing ultimate freedom. Creatively inclined, Nina began expressing herself through painting even before she could write. Recognizing this talent her mother enrolled Nina in early foundational art classes at 8 years of age and was instrumental in creating Nina's rich background in art education.

Throughout her childhood, Nina participated and won national and international awards in many art competitions. As one of the youngest students to join the Sophia University (Then Sophia College) of Fine and Applied Arts in Mumbai, at the age of 15, Nina went on to win many accolades, awards, trophies during her education passing with distinction and the highest rank in the country. This led to her being featured in national newspapers.

Since then, Nina has pursued her art and her passions along with a very successful Corporate career. She has participated in many solo and group exhibitions in India and Overseas. Although she is trained traditionally, Nina is very much drawn to digital mediums for painting and drawing. She loves the light that is portrayed through her art which is only possible through digital mediums.


Other works by Nina Mistry