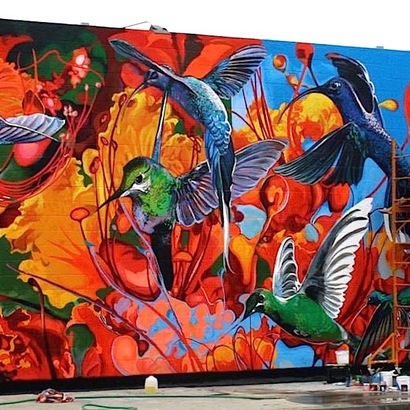 Nicole Ponsler has painted for more than 25 years. She is known for dramatic, large-scale compositions that energize spaces and engage viewers. Her work is held in public and private collections throughout the state, including permanent mural installations in Indio, Santa Clarita and Point Arena, CA.

Nicole grew up along a river in the middle of no where in Southern Indiana. As an only child, she learned to occupy herself by drawing and painting. Her mother worked at a paper factory and provided long rolls of paper that were spread out across picnic tables. Nicole would make long paintings over and over again, mostly about her natural surroundings. That discipline, nature-affinity and instinct to think big informed her later work.

Career highlights include permanent public art collections held by the afore mentioned cities. Nicole is particularly celebrated for her two most recent mural installations commissioned and owned by the cities of Indio and Point Arena, CA. Both murals have received accolades for their vibrancy, movement and energy. Nicole’s work revitalizes spaces and elicits a sense of energy and vitality through natural themes that highlight our interdependency on nature. In addition to her pubic artwork, Nicole has been a featured artist at Stewart-Kummer Gallery for over 20 years, where she has headlined exhibitions and sold nearly every piece she's ever shown. Currently, Nicole is working on a series of large-scale restaurant murals for a business in Anchor Bay, CA.


Other works by Nicole Ponsler