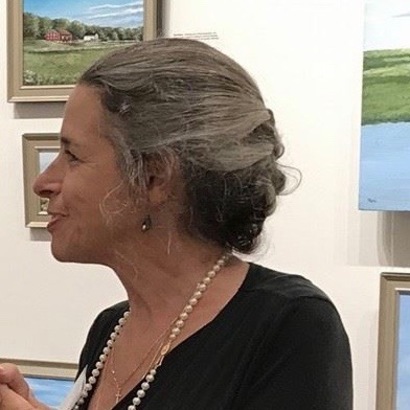 My earliest memory of sketching is in a cow pasture. I think I was 10. A Saturday children's class. I remember butterscotch candies being a part of that day. Funny the memories that stay with us, isn’t it?

At 13, my mother placed me in a Saturday morning painting class at Moyer’s Art Gallery in Camp Hill, Pennsylvania. Little did she know the lifelong effect her choice would have. As the years progressed, I began to refer to the instructor, Jeanie Moyer, as “my other mother” and she to me as “her other daughter.” Jeanie was my first exposure to spirituality, and to ways of viewing the world differently than what I learned at home.

I studied a combined art and academic curriculum in high school. Urged to pursue art in college, I made an intentional decision to do otherwise. I was under the mistaken assumption that work and enjoyment could not be synonymous.

I started college as an Animal Science major at the University of Delaware (back to the cow pastures), then transferred to Gettysburg College where I struggled through a Biology major (about as similar to animal science as horse shoes and running shoes.) During a one month January term I took a figure drawing course from the head of the art department, a man notorious for "no A’s" and yes, I earned an A. Then went back to the labs.

I'm a firm believer that God gives us signs. I suppose I wasn’t paying attention.

Following graduation, there was one short year at the Lutheran Theological Seminary in Gettysburg. My faith deepened, even as my grades and life pointed me in directions that would not include ordination as a Lutheran pastor.

All the while I continued to paint. In 1995, I was offered my first painting commission – an old orchard barn in western Pennsylvania. On a beautiful day in early October, I found myself once again in a field, camera around my neck and sketchbook in hand. I wore jeans and a t-shirt and was paid to do something I loved. Said to myself, “Oh, so THIS is what work can feel like!”

I relocated to Cape Cod in 1997. Opened my first gallery in the breezeway of my home. Then a different one on Main Street in Falmouth, finally settling into a smaller working studio in West Falmouth. Acknowledging that maintaining retail hours is not my strength, I closed the gallery and moved my studio back home.

I've always thought of my style as impressionistic realism, but in the past six months, this has changed. One night, when particularly frustrated with a large painting that was mis-behaving, I took a painting knife to it and started to simply smear the paint around. It was – liberating. Exhilarating. And at the same time, it quieted my soul. I had created my first abstract painting, quite unintentionally.

So I continued to experiment with this new method. To be honest, it scared me. I was used to starting out with a photograph, and a destination in mind. Now, I was in front of a blank canvas having no idea where it was headed. My process became one of growing quiet, praying, listening for inspiration, choosing colors and moving the painting knife where I felt led on the canvas. Abstract paintings emerged before my eyes, the result being seemingly random patterns of paint that I would describe as divinely guided. Also allowing this new process to influence how I approach painting of more realistic scenes.

Surrender. Ask God's help. Then go where I feel led. Not unlike how I try to live my life. Not always easy. Often I get in the way. But God never fails to delight and surprise me, or as one dear friend says, "God dazzles me."

A little more about my background?

I have taught classes in basic drawing and painting, and spiritual creativity. Drawing classes were based on Betty Edwards’ book Drawing on the Right Side of the Brain. Creativity courses were based in original material as well as Julia Cameron's’ book The Artist’s Way.

In 2008, I wrote and illustrated Mimi's Joy, an inspirational book featuring pieces of my paintings,

In June of 2015, I published my first novel, Painting Lily. I intended it as a thought provoking read, what I now call "a cautionary tale." Please don't let the title mis-lead you. It's not about painting. It’s about a woman who makes some seriously unwise choices, then tries to figure out how to get her life back on track, in spite of those choices.

In March of 2017, I published a non-fiction piece, titled The 10 things – An Invitation to Dive In. A story of a faith journey. An invitation to go deeper with one's own walk with the Lord.

I am also blessed with the role of Minister of Music at Christ Lutheran Church, Falmouth, playing organ and piano every Sunday morning,

Whatever hat I am wearing – artist, author, or musician – my personal intention is to bring honor to God through the use of my creative gifts, ever grateful for God's gifts of grace, mercy, and love.


Other works by Mimi Schlichter