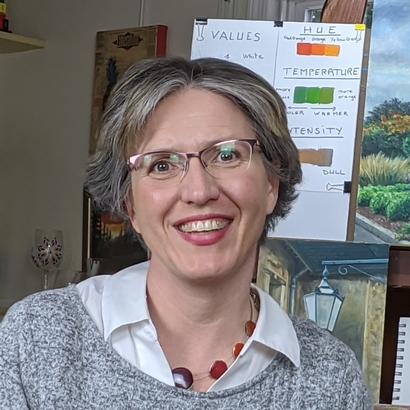 Life is basically a huge collection of moments. Sometimes you have no idea how everything will end up tying together – Marion Buricatu had a lot of those moments, and she definitely never expected Marion’s Workshop to be the result. (As is often said, funny where life takes you!)
Marion was born in the rural town of La Fleche, and grew up surrounded by the ocher wheat fields and dark green forests that make up the French landscape. Academically, Marion oriented herself towards science and received a masters in Geophysics from Pierre et Marie Curie University. She recalls with a chuckle that she excelled at anything visual, like cartography and identifying minerals under telescopes. After graduating, she worked in the environmental management field.
In 2001, Marion and her family moved to the USA. She decided to try her hand at something completely new: painting! She found she had a knack for oil painting, and began painting originals and teaching her own classes in 2011.
As she grew her business, two big themes emerged in her work: France and the USA. Marion was especially drawn to landscapes and scenes of daily life; she would paint American scenes with a French eye, and French scenes with an American eye.
Marion’s life reflects biculturalism and its contradictions. It took an embarrassingly long time for this Eureka moment to happen! But once she realized it Marion began expanding her horizons in the art world, building off this cornerstone. She deepened her technical training and educated herself in art history. In 2015, she started exhibiting and developed a series called “Art Talks,” simple presentations aimed at making art history accessible to all. In 2018, Marion was certified as a docent at the Worcester Art Museum. In 2019, she started teaching with the Hopkinton Center for the Arts, where she works with students of all ages.
Looking back, Marion says it’s incredible how all of those moments came together so well. Her childhood in France, her move to the USA, starting a company based on her cultural duality, and her curiosity to see everyday things with a new eye. Everything added up to create a business that fully embodies Marion – from her French roots to her American life.


Other works by Marion Buricatu