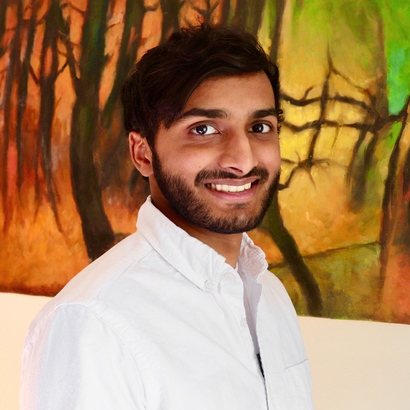 As an Omaha native who discovered his passion for creativity later in life, Manav Nirmalraj’s work focuses on finding beauty in the smaller facets of life. By focusing on smaller parts of a whole, subjects often overshadowed by the hustle of the everyday come to life. Without being given the entire picture, the viewer is left to interpret the piece in their own unique and personal way, creating an imaginative story of what they are seeing. Manav’s only goal is that the piece, often featuring warm tones and soft textures, provides a sense of warmth and comfort while encouraging creative pursuits.

Manav’s work is heavily influenced by modernism, architecture, and textures, as well as an appreciation for the masters of traditional art. As a once student of architecture who turned to pursue a medical career before ultimately settling on data science in the healthcare architecture industry, Manav has drawn tremendous influence from Leonardo da Vinci, a true master who combined artistic and scientific pursuits throughout his life. As such, Manav enjoys learning about the genius and combining nature and structure in many of his pieces, such as a modern building covered overtaken by nature and warmth.

Having grown up in Omaha as a first generation American, Manav has always had a love affair with the city that was so welcoming to him and his family. He enjoys capturing as many aspects of the city he can, from local shops to popular sites, such as the downtown landscape and the Omaha Henry Doorly Zoo. Ultimately, he hopes to give back to the community that gave so much to him, by encouraging creative pursuits and pushing boundaries for anyone he can.

As Manav progresses in his journey, he plans to continue eliminating barriers between art, technology, and science by encapsulating all in his work. He is currently exploring the use of data in creating art through the power of technology and computer vision. He also hopes to promote environmental awareness and stability through the use of art and science. Manav is open to all new artistic opportunities and endeavors.


Other works by Manav Nirmalraj