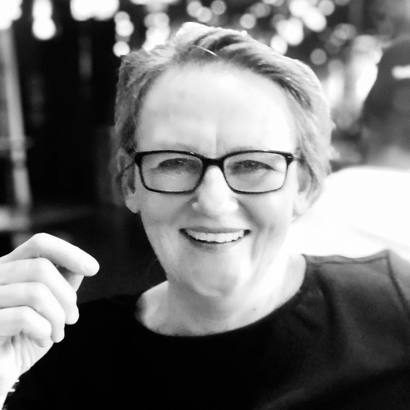 Liz Penniman, born and raised in San Jose California, is a descendent of fruit farmers, fiddle players, poets, and engineers. Her parents encouraged her natural aptitude for architecture, and she did proceed with that education and career. Following her undergraduate degree in Environmental Design, she studied classical portrait painting in New York, and contemporary figurative painting in San Francisco. Over many years and many canvases the image of the figure has remained. Either deep underneath the rhythmic gesture of abstraction, or out on the surface of a narrative, Liz’s inspiration derives from the physicality of being human.

A great influence on Liz’s work has been extensive travel. In each locale, the light, the color, the language, the music, and the people have combined to bring out new dimensions in her approach. In Greece she absorbed the perfection of Cycladic figurines. In Italy she embraced the exaggerations of Late Renaissance Mannerism. In Southeast Asia the elaborate mythic figures occupied her drawings. In Brazil the spiritual tradition of the Orixas became the subject of a commissioned body of work and a solo show in New York City. She has exhibited widely throughout the states of Texas, Nevada, New York, and California.

Currently, Liz lives and works on the eastern slope of the magnificent Sierra Nevada mountain range. The vast high desert and the lush snowcapped peaks provide a dramatic backdrop to her ongoing development as a human and as an artist. She takes all the subtle and the pronounced colors and shapes from nature and amplifies them on to paper and canvas. Working in both oil and watercolor, the immediacy of mixing colors and making marks helps her move ever closer to what might be termed abandon. As painters before her have said “abandon long practiced becomes a skill”.


Other works by Liz Penniman