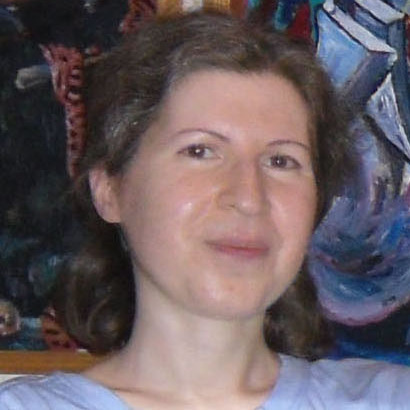 Lia Chechelashvili is a self-taught artist from Georgia. Her works have been exhibited and sold worldwide, they are kept in private collections in UK, USA, France, Germany, Australia, Ireland, Italy, Switzerland, UAE, Japan, Spain, India, Georgia, Austria.
Lia Chechelashvili's work is an exercise in means and effect. As she says, "minimum means and maximum expression" is her goal. With a background in math, Lia's analytic nature is well suited for the problems of reductive representation. Her work plays with the formal character of continuous white line on a dark background. The sinuous drawings wrap around the picture transforming line into figuration, denoted dimension, and pure abstraction. Other works exercise the same dramatic rhythmic form but use color. Lia's world is a magical one. The characters live in a weightless and sometimes boundless space. Characters and forms relate to one another in a way that speaks about human interaction. In this sense, her work is about the relationship between individuals and the space of interaction.