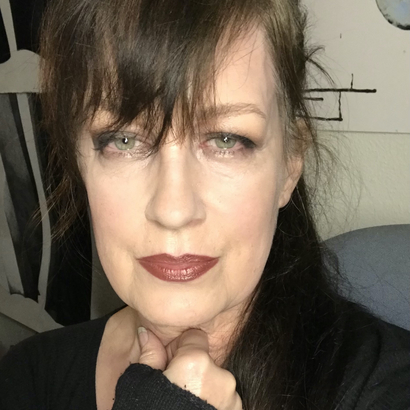 Internationally collected artist Kris Haas (selling her work online since 2009) works have been featured in 4 different television shows, such as AMC's Mad Men, Property Brothers, Leverage, and The Politician, numerous corporate collections, and countless private collections in over 20 countries across the globe.

The need to create has always been there, ever since she was a little girl. It is a primal one, not an academic one, which is why she chose to for the most part skip the academia route aside from a couple of classes. She always feels as if the best classroom was in the studio, doing the work, and following her intuition, the words would come later. Sometimes they do and sometimes they don't. More often they don't since having had 4 concussions and a permanent Brain Injury Disability since 2004.

With that said, she is drawn to color, shapes, and movement in that order mostly but not all the time. Kris thinks it is important to give the color space to breathe in order to be understood and really seen and not crowded too much. She likes to give it space to dance, to move, to let the viewer to imagine what the painting could have looked like seconds before it was finished and if it was alive what could it have looked like moments after it was created. This describes her earlier works and in staying true to her nature as a person and artist she evolves to let more complex structures into her life like her recent Disjointed Reality body of work and it's derivative Worn & Torn.

Kris' more recent works encapsulate a putting back of her 'disjointed' life', since finally being stable enough, after many years of instability since acquiring her Brain Injury, & even though she feels 'worn & torn' because of life's challenges, through it all she still chooses to create something meaningful, something beautiful, instead of getting caught up in 'what might have been.'


Other works by Kris Haas