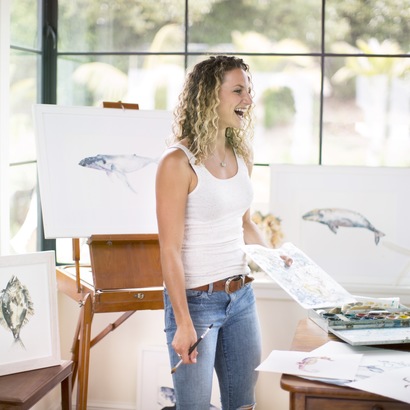 From saltwater creatures to light-saturated waves, Kelly draws much of her inspiration from the coastal beauty of her hometown in Santa Barbara, California. Influenced by a family of fishermen and marine biologists, international travel, and a background in elementary education, Kelly’s pursuit of art has been a melding of her passion for creativity, education, and the natural world. She is self-taught, deciding to pursue a career in art in 2017.

Kelly's work has been featured on wine labels, in acclaimed restaurants, in galleries, solo exhibitions, and even on apparel. In her short career as an artist, Kelly has won first place in watercolor at the prestigious Beverly Hills Art Show, was featured in multiple publications including the Santa Barbara News Press and Watercolor Artist, has painted murals in the center of town, and was sought out to design a Burton snowboard with three-time Olympic medalist, Kelly Clark. With spontaneous but deliberate brushstrokes, Kelly endeavors to reflect a balance of wild whimsy and intentional design with her art. Her work spills from her insatiable fascination with nature, and a desire to inspire a similar curiosity and awe in her viewers.