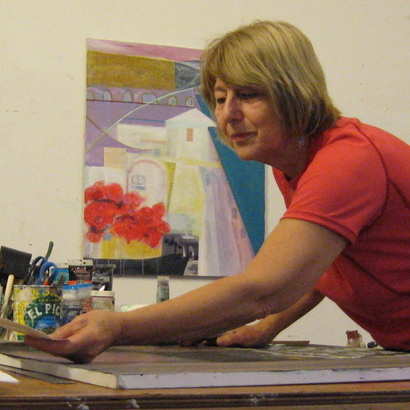 Represented in the Whitney Biannual 2020
Whitney Museum, NYC
Karin Batten was born in Hamburg, Germany, and studied painting and sculpture at Central Saint Martins College, London and received her MFA from Hunter College (CUNY), New York City. Her work has been featured in New York Magazine, New York Times, The Village Voice, Daily News, and Art News. She is represented by June Kelly Gallery in New York City, and has been the director and curator of the Westbeth Gallery in NYC.
Batten has shown her work in solo and group exhibitions in the United States and Europe. Her work is included in many permanent collections, and has received grants for public art from the NYC MTA; two Pollock-Krasner Foundation Grants, and an Artists’ Fellowship in Painting from the New York Foundation for the Arts.
Visit the first video on my website karinbatten.com of my recent solo show
"KARIN BATTEN New Paintings" at June Kelly Gallery, NYC


Other works by Karin Batten