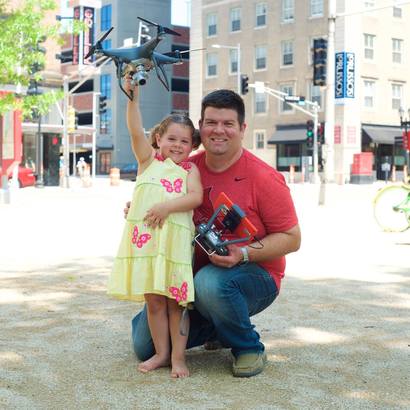 Justin started off as a wedding photographer. In 2017, he decided to get a drone to add to his available tools for wedding photos. He shot a couple weddings and used the drone, but ultimately 2017 was just a slow year. Justin wasn't shooting a lot of weddings and the drone was collecting dust. He decided to take his daughter, Giulia, out to see some places around town. With the drone in tow, they set out to take some photos. Utilizing the same skills of standard photography, he composed and edited the drone photos just like normal photos and posted them online. They were very well received. Someone suggested he should make an instagram account to share his pictures. On Father's Day 2017, he created STL From Above and posted some pictures. After only a day or two he already had like 50 followers. Justin was ecstatic! Strangers were liking his photos. So he took more photos. And more. And more. Saint Louis University hired him to take campus photos, Gateway Arch Park had Justin take photos at Kiener Plaza, and the list goes on. It's been a pretty wild ride for Justin and things just keep growing!


Other works by Justin Barr