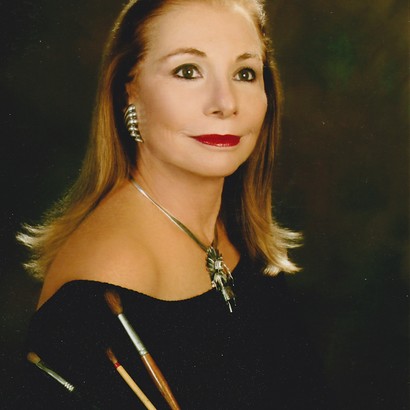 Judith Kingsley is recognized for her lyrical and compelling landscape, seascape,
and abstract paintings in oil on canvas, and for her watercolors, featuring Asian, contemporary art.

Judith has been selected for membership in "Who's Who of the World", "Who's Who in America", "Who's Who in the South and Southwest", and "Who's Who of American Women".
She was born in New York City and attended the Parsons School of Design from the age of fifteen. Her further training was at Syracuse University Adelphi University, Pratt Institute, the Museum of Modern Art, Carnegie Hall, and the National Academy of Art. She soon spread her wings to Europe, studying at the Positano Art Institute in Italy.

On her return to the states, she had numerous one-woman shows in New York City. She also exhibited at the Palm Beach Gallery, the Lobster Pot Gallery in Nantucket, Massachusetts, and the Crystal House Gallery, in Miami Beach. Judith was represented at the Darvish Collection in Naples, Florida. She is now represented by the Santa Fe Art Collectors Gallery in Santa Fe, New Mexico, where she resides.

Her work has also been featured in Europe, including at the Hofburg Palace in Vienna Austria, and at Fortnum Mason in London, England.

After having lived in Manhattan for most of her life, she had homes in Carmel, New York, and on Marco Island, Florida. She now resides in Santa Fe, New Mexico and continues to develop her art from the classic and traditional style to the more contemporary.
Judith has collectors throughout the United States, as well as in Canada, Asia, and in Europe.


Other works by Judith Kingsley