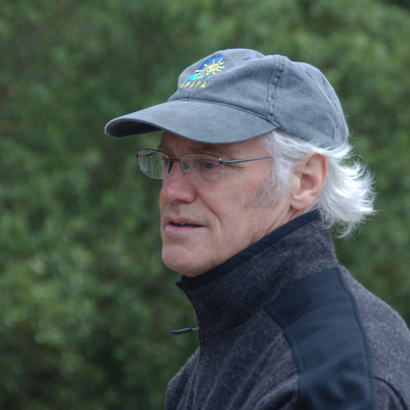 Jim Lamb was born in Hamilton, Montana and grew up in the Puget Sound area of the Pacific Northwest. Having parents who appreciated art and the beauty of nature instilled in Jim from an early age the desire to create artwork. The family often made trips to the Frye Art Museum in Seattle, where Jim was exposed to the representational interpretations of many of the great German landscape painters of the past century. Their use of color and the handling of light intrigued the young artist and had a direct influence upon his interest in one day depicting the landscape in oil on canvas.

In Southern California he slowly began to build his reputation as a freelance illustrator, while taking courses at the Art Center College of Design in Los Angeles. But Jim’s long-held interest in the landscape remained with him over the years and he ultimately made the decision to pursue the painting of the landscape.

Lamb’s entire illustration career was built around working from photographs, so the idea of working from life, with all the challenges presented by nature made him realize that he was going to have to learn how to paint and paint more rapidly. It was an awesome challenge. He took several workshops from leading contemporary landscape painters, which proved to be invaluable in his desire to pursue the direct depiction of nature.

In 1991 Lamb was chosen Artist of the Year for the nationally recognized Southeastern Wildlife Exposition in Charleston, South Carolina. His work was also selected for the National Birds in Art Show which traveled to Japan and can be seen in North Light's book, The Best of Wildlife Art. The US Postal Service has included Jim's work in a show at the Norman Rockwell Museum in Stockbridge, Massachusetts displaying the best of 40 years of U.S. stamp designs, and the exhibition traveled to several other museum venues in the US. One of his stamp designs depicting the children’s novel, LITTLE HOUSE ON THE PRAIRIE, is in the permanent collection of stamp designs at the US Postal Museum at the Smithsonian Institution in Washington DC.

Jim is a member of the California Art Club and has exhibited his work in the Club’s annual prestigious Gold Medal Exhibition, as well as exhibitions sponsored by the Pleinair Washington Painters, and the Pacific Rim Institute of Marine Artists. In 2008 Jim was awarded the merit award by his peers at the annual Western Rendezvous Exhibition for his painting, APPROACHING THUNDER. His work has graced the cover and was featured inside the May 2010 issue of Southwest Art magazine, as well as in the February 2001 issue. The February 2009 issue of Art of the West magazine also featured his work. Lamb has exhibited, beginning in 2001, at the historic Laguna Art Museum for its annual Invitational Plein Air Painting Competition held each October. In 2015, at the 37th Annual Salmagundi Club’s Juried Painting & Sculpture Exhibition, Lamb’s painting, MONTANA HAY, was awarded The Audubon Artists Award. Additionally his California galleries have held several one-man exhibitions of his work and a year-long exhibition of his NW paintings were displayed in the Governor’s Mansion Gallery in Olympia, Washington. He is the only living, Washington artist whose work has been selected to be a part of the permanent collection of the Washington Governor's Mansion Fine Art Collection.

In addition to his fine landscape paintings being included in private collections throughout the United States, Lamb's work has literally been seen around the world in the form of limited-edition prints, collectible plates, greeting cards, puzzles, posters, apparel, U.S. postage stamps, sculptures, and many other forms.


Other works by Jim Lamb