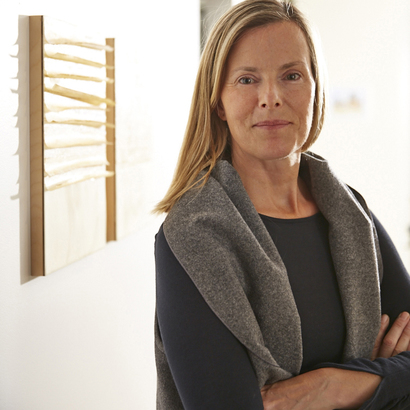 Jenny Phillips is an artist based in San Francisco, CA. Born in Washington DC, she grew up in Eastern Long Island, Majorca and New York City. She majored in Art History at Denison University, where she taught printmaking and was awarded the Woodrow Deckman Studio Art Scholarship. Moving back to New York City, she spent her formative years at the Brooklyn Academy of Music during the late 80’s and early 90’s working as a graphic designer. BAM featured groundbreaking works of artists such as Pina Bausch, Robert Wilson, Laurie Anderson, Merce Cunningham, Mark Morris, Peter Brook and Philip Glass – and at a time when being a graphic designer was more akin to a collage artist (paste up), with the tools of the trade consisting of glue, pieces of paper and an x-acto knife. The combination of theater, dance and music that Jenny witnessed at BAM continues to inform her work today, both in the moods she creates and in the gestures and rhythms she employs. She relocated to San Francisco in 1998, and as the world of graphic design shifted away from from the physical and into the digital, Jenny’s love of making things eventually prompted her to pursue a full time career in art. She studied printmaking and painting at California College of Arts, the San Francisco Art Institute, and the Kala Art Institute. Since 2011, she has exhibited her works throughout San Francisco, the greater Bay Area and in additional locations throughout the US. In addition to private collections, her work can be seen at the Encaustic Art Institute in Santa Fe and at Stanford Children’s Hospital in Palo Alto, California Pacific Medical Center (Van Ness) in San Francisco, Sunrise Hospital and Medical Center in Las Vegas and One Medical in Los Angeles.

Jenny works in a number of different media. She seeks to evoke the mood, luminosity and texture of space, light and organic form. Her work is about feeling, rather than ideology or narrative. She primarily uses paper, wax, oil paint, watercolor, India Inks and acrylic washes, borrowing techniques from printmaking (dry point, chine collé) and combining materials in new and unexpected ways. Her preferred tools are Japanese paint brushes, blowtorches, electric irons and X-acto knives – though at times she will rely on the camera to record ephemeral assemblages of layered materials.

Jenny lives and works in Bernal Heights in San Francisco with her husband and two children.


Other works by Jenny Phillips