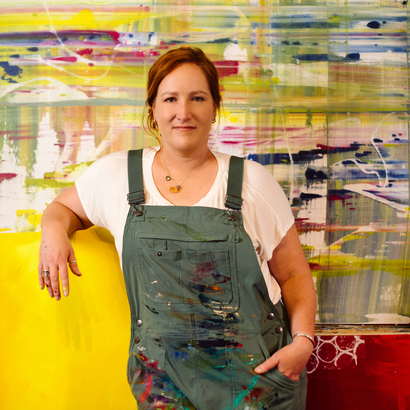 Color has always had a profound influence on Jen's state of mind. While traveling in the American southwest with her sister more than 20 years ago, she was struck by the colors she saw there – so vivid, so alive, so powerful. The experience struck her so much that when she came home she immediately bought paint and canvas and started trying to convey the rich spectrum of emotions those colors evoked in her.

Some of the pieces she creates come out of her in just a few hours… they are fully formed and ready to blast onto her canvas. In most cases, these are images she can see in her head before she begins. In some instances, the art is built slowly over several weeks and layers until it has developed just the right feeling… it evolves into something she did not visualize prior to beginning.

Some of her favorite pieces are those that develop over time. They begin with a seed of an idea or a fragment of an image that pops into her head. Her eye might catch on the color combination of someone’s shirt walking past her on the sidewalk. That seed then grows into an expanded palette… Slowly form and motion start to creep in and the energy starts to bubble up. She gets more and more excited about what is happening and that excitement gets translated through her brush strokes onto the canvas.

Those inspiring colors can strike her from anywhere. In 2020, Jen was awarded the grand prize in abstract art by "International Artist" magazine for a piece that was inspired by the colors she found reflected in a black pearl while traveling in Tahiti.

The goal of Jen's work is to inspire energy and excitement from within – to empower the viewer to do something bold. Her paintings are not meant to “be vanilla” or just match your couch. These images are meant to make you feel strong and powerful — to help you feel the excitement she had in creating it — to burst into your morning with a zing or invigorate your senses after a long day. Ideally, her art reminds you that life is for feeling and stretching and living.

Jen graduated from George Washington University earning a BA in Visual Communications with a minor in Psychology. She lives with her husband, daughter, and “furry children” in Annapolis, MD.


Other works by Jen Sterling