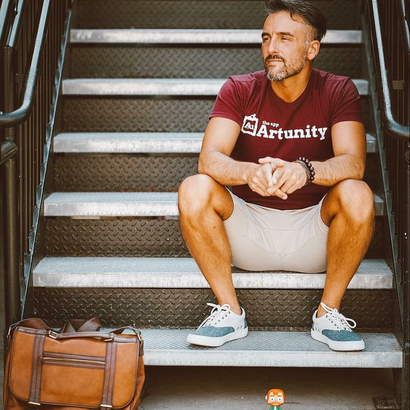 Laporte, IN
A patchwork of pop culture and rebellious controversy, Weinberg's work is equal parts fun and iconoclastic. and always honest.

A graduate of the prestigious American Academy of Art in Chicago, IL, J.J. Weinberg holds his degree in the discipline of illustration but claims that the tutelage of Dr. Trapp lead him to value the advancement of figure drawing as one of the most powerful skills an artist can develop.

justmeandvinn.jpg
In 2015, Weinberg's painting “Midas’s Love – The Gold Kisser” was awarded the Grand Prize in the first city-wide Pop-Up art festival in Valparaiso, Indiana. The painting is now a part of Valparaiso’s downtown art installation in the form of a utility box wrap at the corner of Napoleon and Lincolnway. Shortly thereafter, Libby Chiu (current chair for Indiana Arts Commission and former National Endowment for the Arts) nominated him for the Kennedy Center Citizen Artist Fellows award in 2016.

As the ever-evolving “artrepreneur”, Weinberg was able to raise $100K from 3 angel investors to launch of the prototype of his mobile platform for artists called Artunity. Donate to an artist for a chance to win their original art, Artunity is like Instagram meets GoFundMe with a Las Vegas Twist. Artunity won the People's Choice award for Startup of the Year in New Orleans in early 2019 and was selected as one of the top 100 Startups to gather again in Memphis in October 2019.

In late 2016, after the Chicago Cubs won the World Series, Weinberg painted “Field of Dreams” for his Dad. The video of his father’s reaction to the gift went viral and with press coverage from the Chicago Tribune and NBC to being highlighted on SportsCenter’s Top Plays. The emotional connection shared by so many Cubs fans and seeing themselves in the father and son, lead to print sales and using the positive story for charity. “I never would have been able to raise that much money in a single day if it weren’t for the magic of what happened with the painting I did for my Dad.” Weinberg said about his donation to the Special Olympics. After taking the Polar Plunge at 4 Winds Field, he was honored as the Top Individual Fundraiser of the day one of the Top 100 donors in the state.


Other works by Jay Weinberg