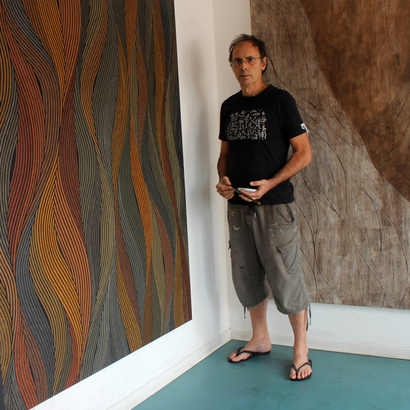 JAIME PRADES
Brazillian self-taught artist, born in Spain in 1958. Lives and works in São Paulo since 1975. In the 80s, he participed in TUPINÃODÁ, a group that is now a historical reference when it comes to contemporary artistic actions in urban public spaces.
In over thirty years of woork, he intensely produced a variety of paintings, sculptures, drawings, objets and installations. His striking strokes are quickly identifiable, despite the wide range of media and languages he created due to permanent artistic experimentation.
His work can be grouped in five main series: Machines, Totens, Absurds, Shamanics and Human Nature. These groups organize the key issues explored by the artist, wich are: the dehumanization; the ancestrality; the joy; the sacred; the materialistic madness.
As art critic Fabio Magalhães said: "Jaime Prades’ INSIDE exhibition represents a significant leap in his plastic expression". Prades’ new paintings, that are being developed since July 2015, present us with a profound experience of perception in others layers of consciousness.

BRAZIL 1970/1975
Studies at the Ayres de Moura/Olavo Bilac School in São José dos Campos until 1974.
Participates in the Winter Festival in Ouro Preto in 1973 where takes up courses in woodcut, live model and drawing.

SÃO PAULO (SINCE 1975)
In 1976 signs up at the "Oficina de Gravuras 76" and attends classes of live models at the Pinacoteca do Estado de São Paulo.
During the two years, attends the Contemporary Art School where he studies paintings, drawings and art history.
In 1976 to 1979 works as a diagrammer at Abril Publications. Concludes his high school years at the Equipe School in 1980. From 1979 to 1983, works at the Oboré Publications in the jornalism group.
In 1981 gets in the Letras College at PUC/SP from which abandons it at the end of his 5th semester in the middle of 1983.

TUPINÃODÁ – 1984/1989
In 1984 inaugurates the workshop of the Tupinãodá group at Vila Madalena in São Paulo.
With the group, he completes tridimensional and graphic urban interventions. In 1986 to 1989 exhibits at the Pinacoteca do Estado de São Paulo, at the Contemporary Museum (MAC/USP), at the Trama do Gosto da Fundação Bienal of São Paulo and in the parallel events of two Bienals in São Paulo.
Took over the tunnels at the Paulista Avenue and inaugurated "Beco do Batman/ Batman Alley" two emblematic places of Brazilian urban art.
In 1988, the group has an exhibition "Tupinãodá" at the Subdistrito Gallery. At the end of 1989 the group breaks up.

ART PLANT 1990
In 1993, he exposes his sculptures at the Art Museum of São Paulo (MASP) under the curatorial guidance of Fabio Magalhães. Between 1990 to 2007 the artist craftly produces around 20,000 sculptures of his characters.

WORKSHOP AND COLLECTIONS 1995
In the start of 1995, he works with the marchand Martin Wurzmann whom promotes his works in Brazilian and international collections.
In 1998 accomplishes his first international exhibition in Japan at the Plaza Gallery in Tokyo.

ONCE AGAIN ON THE STREETS 2007/2008
In 2007 participates in two groups on taking up worth of the communities in the Southern section of São Paulo city.
"The exit is through art" project realized for designer Claudio Rocha and "Galerias Periféricas/ Periphery Galleries".
In the same year, accomplishes an urban intervetion "The Tree of the Questions".
In 2008, intervenes with "The Earth of the Garbage/The Garbage of the Earth" connecting 200 garbage cans in downtown.
Exhibits a series of pannels of "Icons" and "Tree O" and "Squared Tree" at the Olido Gallery under the curatorial guidance of Danilo Blanco and Fernando Zelman.

NATUREZA HUMANA 2009/2010/2011
Starts to construct his evocative sculptures of trees using wood scraps from the dumpsters and city streets.
In 2009 builds the first public sculpture, a project in Bonito no Mato Grosso do Sul during the 10th Winter Festival of Bonito with the curatorial guidance of the Latin American Memorial in São Paulo.
In September of 2010, accomplishes an individual exhibition "Human Matilha" in the Cultural Matillha in São Paulo.
In November of the same year, he publishes the book "The Art of Jaime Prades".

2012
Accomplishes an exhibition "Wall without a wall" at the Priscila Mainieri Ateliê Gallery in São Paulo.

2013
Between April and June, accomplishes an exhibition "BONE/OSSO" at the Cultural Institute Space Cervantes at the Paulista Avenue in São Paulo.

2014
Opens on May 17th the exhibition "peacemakers" in the Mezanino Gallery in São Paulo, on display until June 21.

2016
Make the mural "Metamusicomáquina" in the city of São Paulo.
In the exhibition "INSIDE / INSIDE", using exclusively canvases and paper as support, the artist brings up a new language.

2018
He works in the new "Lineares" series and prepares a collective exhibition at SESC São José dos Campos for November 21,


Other works by Jaime Prades