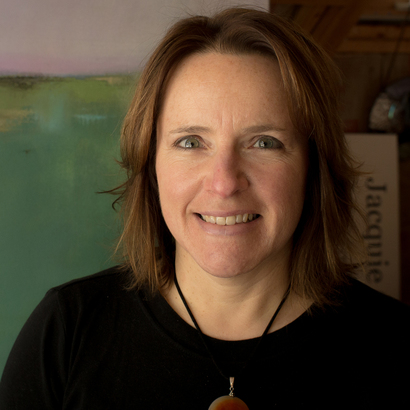 Jacquie was born and raised in Taunton, MA and began drawing the Peanut characters at a young age.

Although she has a degree in Accounting, art has always been played a major part of her life and in 2000 she focused on learning to paint. She spent years painting on her own and created smaller plein-air landscapes. This process and self-discipline gave her the best education on light and color. She built upon this knowledge and began creating abstract landscape paintings continuing her focus on color.

In 2016 she was invited to become a member of Art in Embassies run by the US State Department and has a painting included in the residence of the US Ambassador to Monrovia, Liberia. In 2012 she was selected as one of the Top 50 Emerging Artists by the editorial staff of the New York based magazine, Art Business News. In 2013 she was a featured artist with the retail store West Elm where her work was shown in their catalog and on their website. Also, in 2013 she was invited to display her work in the high-end marketplace, 1stdibs, in the New York Design Center in New York City. She was the first non-New York artist invited to sell her paintings thru this venue.

Prints of her work have been sold worldwide and she has had pieces sold thru Pottery Barn, Neiman Marcus and Home Goods. Her artwork has also been used on production sets for the Netflix series, House of Cards and Netflix Documentary – Operation Varsity Blues, The College Admissions Scandal; a Buick commercial and the Food Network – Valerie's Home Cooking.


Other works by Jacquie Gouveia