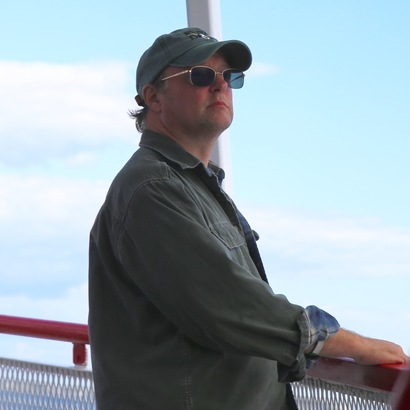 Ian A. Hanks grew up on the coast of Maine, exposed to sailing and the sea. His parents, Ted and Consuelo Eames Hanks were life-long accomplished sailors and instilled in him a love for the ocean and boats of all kinds. Both parents were professional artists and under their guidance he learned to draw and paint at an early age. Ian’s father, Ted, was a watercolorist and nationally recognized wood carver whose body of work includes life-sized black ducks above the trout pond at the LL Bean flagship store in Freeport, Maine. His mother, Consuelo, was an accomplished artist in both pencil and watercolor mediums with a body of work that gained her a national reputation and following.
Ian studied criminology at the University of Southern Maine and pursued a career in private security and investigations as he started a family, including a daughter he and his wife, Jaime, adopted from Guatemala.
Ian has been painting since he could hold a paintbrush, thanks to his parents’ inspiration and encouragement. His paintings have been displayed at galleries in Maine and included in the International Maritime Art Show at the Mystic Maritime Museum and Gallery in Mystic Connecticut.
Ian is currently welcoming commissions.


Other works by Ian Hanks