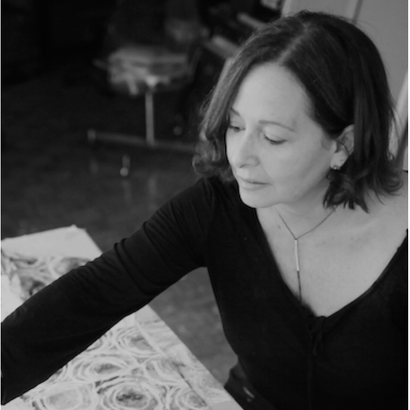 About Heny Steinberg
In her recent paintings, Eny Steinberg is carrying out a spatial research.

She is looking for compartmentalization; organizing a two-dimensional space existing in a vacuum, into the expressions involved. She is assessing the territories we inhabit.
Persistently she shows enormous deserts.

We are used to saturation and to face the dilemma of space being slowly vanished in the cities. The urban paradox stems from the apparent space congestion.
No wonder her work uses the city as a framework. The city has weighed and measured our sensibility and intellect.
Our understanding of the contemporary city is directly linked to the way in which we go about and live. The periphery of the city and the never-ending hours we spend sitting in vehicles makes us grasp the enormous areas sectioned in lots lacking of human scale.

Therefore, the acrylics on canvas by the Mexican painter show desolate extensions. Reduced to the incipient urban tracing. Highlighting the vacuum.
Similar to the Zen Buddhist mu (void-nothingness), her proposal is to be empty and turn into basins where the world will flow and reverberate. Steinberg's plains/containers facilitate the observation of the plowing through the vacuum. Without any construction or paraphernalia.

The feeling of vacuum is reinforced by the uncertainty we feel when facing the absence of orientation guidelines. The coordinates grid superimposed in her paintings do not give away any location. There are no reference points. No topographic data. No human scale or North.

In order to build a humanized map and foster spatial awareness, we need to go across these territories and create new narratives.

The second series presented consists of canvases which zoom- into a closer look at these lots. These events are tattooed in the canvas with the residue of colors over the grey lots. These close-ups turn the cities into buildings, a by-product of geometry.
Here, the coordinates grids, visible in the first cartographies, disappear or loose their quadrature. Sketchy images of root systems and tree-shapes prevail. Traces of an esplanade rail suggest that those lots have not been totally inhabited. They encode every incident. They have memory.

The third and last series is zooming -in again. Getting closer into the parameters introduced. Using serigraphy ink on Plexiglas black and grey branches are sketched intertwined, a counterpoint to the eroded lots in the first series of cartographies.
The tree-shaped curtains in Six feet under make us discover roots that insist on going through the earth looking for the memories that barely surface.

Eny Steinberg work invites us to travel from the map to the localized event. She is suggesting that the spatial memory guidelines reside in the relationship between the lot and the human mark registered.

Tolstoy's Garden El jardÃ­n de Tolstoi summarizes her exploration. Within the immensity of the deserted lots there is one space occupied by typography. That is an indicator that something human has labeled the expanse.

Steinberg's imagination discovers, within the territories, the link between abundance and vacuum. The complex and diverse strategies imagined pursuing the cultural appropriation of space.


Other works by Heny Steinberg