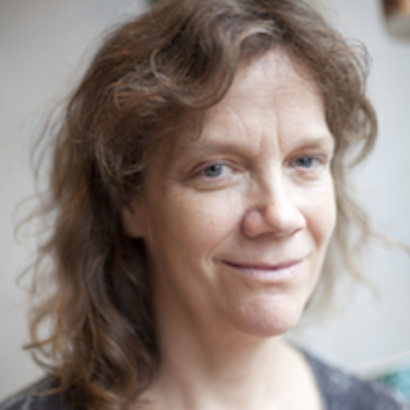 New York City artist, Gwyneth Leech makes paintings and drawings of construction sites in Midtown Manhattan as the area undergoes major physical and demographic changes. In 2015, the construction of a 42-floor building began outside Leech's studio window on West 39th Street. Her first impulse was to move. Instead, she decided to stay and make paintings of the process as the new building went up and blocked her view. "I started calling it the Monolith. It had this slab-like quality, this immovability – and it began to represent other monolithic things in my life that couldn't be shifted. It became a metaphor for things we can't change, but have to learn to live with and to work around in some way."

Once the Monolith was finished, Leech took her new fascination with construction outdoors, painting at a travel easel on sidewalks across Midtown Manhattan. She has now spent several years documenting skyscraping building projects that are dramatically changing the cityscape.

Leech returns to certain vantage points dozens of times over many months. It is the in-between building stages that capture her imagination. "It has been an incredible experience to document these massive buildings as they rise from holes in the ground, surrounded and crowned by tower cranes. I feel a kinship to wilderness painters of earlier times – dwarfed by massive forms, striving to capture the light and weather as it changes endlessly across a mountainous landscape. But these mountains are man-made and each time I come back the structures have changed!"

"Construction Paintings", her first exhibition of this new artwork, was on view in Fall 2016 at the head office of Sciame LLC, a construction company in New York City. In February and March 2018 she exhibited “Construction Series” in the Kaufman Arcade, a public art space in the Garment District, NYC. In 2018, her construction site artwork was featured on NY1 television news, in The Village Voice, in international media and became the subject of a highly regarded short documentary, The Monolith, from New York City director Angelo Guglielmo. Her most recent solo exhibition, “Construction Sites” was held at Clinton / Hell’s Kitchen Studios Gallery in May/June 2019.


Other works by Gwyneth Leech