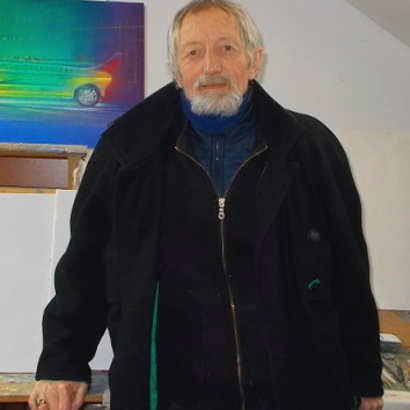 Gerard Tunney was born in Sunderland where he lives now, after re-locating from Cambridgeshire where he lived for number of years..He studied at Sunderland university followed by The university of Northumbria where he obtained his Masters degree in Fine Art

It was his return to the north east that encouraged him to resume his love of the sea with a series of paintings based on coastline reflections and racing yachts. This has also encouraged Gerard to travel to other UK locations in pursuit of further maritime subject matter.He has also extended these themes with a series of city paintings linked to the pictorial idea of window reflections to create a more inclusive, overall idea of the city e.g cars, architecture,tourists etc

He also completed a series of Fine Art residencies with the Birmingham Royal Ballet, Opera North , and Northern Sinfonia and this has produced a parallel body of work based on theatre, ballet,Shakespeare, myth.

His love of Shakespeare has inspired him to produce highly original narrative paintings that are much sought after.

He has been a professional fine artist for over 40 years supplementing his studio work with various lecturing posts and gallery work. He has shown widely across the UK, particularly in London and the South and his work is held in many private collections in both the UK and also Europe.


Other works by Gerard Tunney