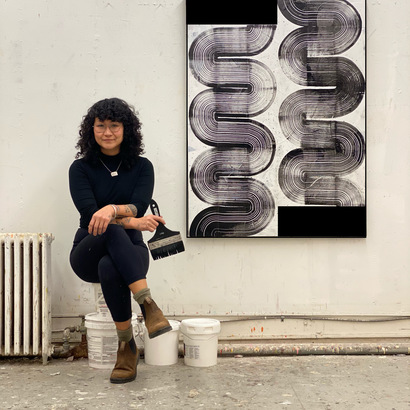 Emon Surakitkoson (b. 1985) was born in Thailand and emigrated to the United States when she was 19 years old. Emon was always interested in the arts but was discouraged from attending art school in her home country. When she arrived in the US, she worked in a variety of jobs in the food and beverage industry. In 2018, she started experimenting with painting and mixed media, and began selling her work. Since then, she has developed the unique style of sculptural, black and white paintings for which she is known, and in 2020 she transitioned to working as a full time artist.

Emon employs a restricted palette that stretches the limits of her medium, and acts as a challenge towards creating complexity. She uses bold contrast and repetition to elicit an immediate response from viewers, while a closer inspection reveals the highly skilled technique, nuance and detail that Emon has cultivated. Her work has become increasingly three dimensional as she’s reflected on the emotional impact of work that changes the viewer’s relationship to space.

Emon has exhibited her work around the Washington D.C. Metropolitan Area, and in Canada. Her work can be found in hotels across the continental U.S., including the Hyatt Aviara Resort, Marriott International Headquarter, and the Kimpton Banneker Hotel. She has also done mural work with the international mural festival POW! WOW!. Outside of her art practice, Emon has worked with local organizations to mentor school students in art, and had produced events and markets that support local artists and makers around DC, including through partnerships with the Hilton brothers’ H2 Collective and the John F. Kennedy Center for the Performing Arts. Emon lives and works in Washington, DC, with her English Bulldog, Noodle.


Other works by Emon Surakitkoson