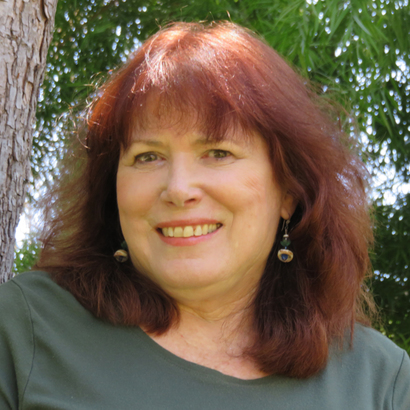 Ellen French is a 3rd generation Californian currently living and working in Los Angeles. Starting at a young age, Ellen showed an interest in art, so it made sense to pursue her artistic creativity. During the first year of college, her formal art education was disrupted by the death of her parents leaving her with other obligations. However, she continued to pursue her artistic interests on her own. Ellen considered her main interest to be painting but expanded her education by taking printmaking classes at U.C.L.A. and exploring different mediums and subjects on her own.

As a painter, mono-prints and collage became an extension of her work and combined both mediums interchangeably. Ellen always fluctuated between abstraction and more figurative formats to “mix it up a bit” and has done several series using these disciplines. At first, Ellen used collage as a base for her abstract works and started her island series sparking her fascination with the varied symbolism of islands and deserts. Also during this time she started paintings of the flora indigenous of Southern California, developing into her current landscapes series.

In 1994, the Northridge Earthquake destroyed her residence in Santa Monica giving her the opportunity to relocate to Marin County and experience living in another part of California but returned to the Los Angeles area in 2019.

Ellen's artwork is included in numerous corporate and private collections, including the U.S. State Department, the Pentagon, and the Makuhari-Messe Convention Center in Toyko, Japan. Through her affiliation with the Los Angeles County Museum of Art former rental gallery she has sold over 70 pieces of art.


Other works by Ellen French