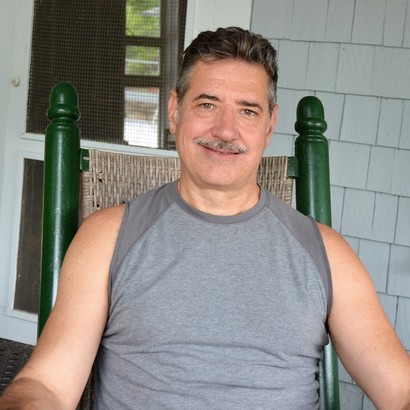 David's drawings and paintings celebrate the visually absorbing shapes, colors, textures and eccentric details of the urban landscape. For him, buildings are the significant carriers of cultural memory. Surviving the builders and residents, they are reminders of remoter lives and times. Over the years, a city takes on an almost geological aspect, with successive generations leaving behind a layering of architectural styles. The enduring physical makeup of a city directly influences its culture as well as its ability to survive as a place people care about.

David's landscapes are usually without people. The buildings are the complete statement. Within their lines and the mood they evoke, the people who built them and lived in them are revealed more clearly than if they have posed for a portrait. Here lies the emotional resonance which inspires him to paint old houses. There is a hard, beautiful dignity in weathering all those years – pure to themselves and uncompromising. Many viewers have observed that the buildings in his paintings seem strangely animated, as if they had personalities of their own. The windows, shutters and doors read almost like facial features, elements of individuality that make their presence felt. The scenes David paints are realistic in perspective, but imaginative in detail, color and lighting. His architectural subjects are often idealized to the status of an timeless icon.

Born in Schenectady, New York, David grew up in Manchester, Connecticut. His mother, Gail Hinchen, is a mixed-media collage artist who has always operated her own gallery. As a child, art was an integral part of his earliest influences and memories as he was surrounded by a diverse group of artist for classes and exhibitions in their home. Starting to draw in earnest, he watched and learned techniques from artists Elden Rowland and Helen vonBorstel (his grandmother) during summers in Truro, Cape Cod. Early on, he was inspired by the lonely landscapes of Edward Hopper and the brilliant color staging of Maxfield Parrish. Essentially a self-taught artist, David's interests in aesthetics, urban design, architecture and history have always influenced his work. He received a B.A. in philosophy and political science from Drew University and an M.A. in political philosophy from Columbia University.

For many years, David worked solely in pen and ink. Slowly, he introduced color and have since developed a completely original technique which is characterized by precise ink images with acrylic tones painted over each other, resembling thin semi-opaque layers. When dry, it produces a smooth matte finish. Other artists and collectors have compared his medium to egg tempera which employs the application of numerous small brush strokes and produces a brilliant, luminous finish.

David a full-time artist who has completed over thirty years worth of commissions throughout the Northeast and beyond. The majority of his drawings and paintings are of historic homes and landmark buildings in metropolitan New York and Boston. Many are based on referrals from past clients. He's also an avid photographer of vintage architectural elements – signs, statues, facades, subway mosaics and stained glass windows. David often exhibits his photographs along with his paintings.

David's work has been featured in regional exhibitions including: The Albany Institute of History and Art, The State Museum Of New York, The Provincetown Art Association, The New York State Capitol and Historic Albany Foundation's Built Shows: 'Albany's Architecture Through Artist's Eyes'. He's also represented in numerous corporate and private art collections. His home and studio is located in Albany, New York.


Other works by David Hinchen