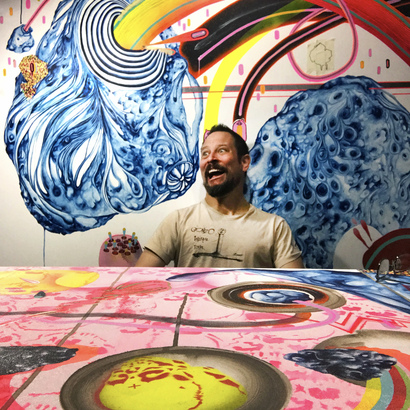 CJ, originally from Pittsburgh, completed his graduate degree at Northern Illinois University. He has created many public art projects in Chicago. Some of these projects are the 2012- Ryder cup five foot golf ball displayed on Michigan Avenue, 2013- two five foot Fire Hydrants displayed at various fire houses in Chicago, 2014-five painted horse sculptures in the Horses of Honor project for the fallen police officers of the city. The Police Memorial Foundation Project commissioned CJ to paint 3 K9 sculptures for the K9 Officers and animals that have given their life in the line of duty in the city of Chicago. He also worked with the Lighthouse Organization of Chicago, which promotes the inclusiveness of disabled people in all aspects of life. There are 51 Lighthouses temporarily displayed on Michigan Avenue. The Lighthouse CJ created is located by the School of the Art Institute. He has collaborated with INDIEWALLS of New York for two fantastic live corporate painting art projects in Chicago and with UnCubed of New York also painting in Chicago for two separate but similar live painting events. Selected by James Rondeau , the Curator of Contemporary Art at the Art Institute of Chicago, for first place in the Art Future 2012 show. That piece was sold from the show to the Chicago artist Maya Romanoff. In 2013 one of CJs’ pieces won the Alice & Arthur Baer Award from the Beverly Arts Center. 2014 was the first year he received a grant from the Illinois Art Council Agency in order to exclusively produce art. Fulton Market Kitchen has also been gracious to host CJ live painting for a few single night events and one week long painting residency. CJ was awarded a purchase prize from the Art in Architecture program for the Math & Science Academy. His most notable piece of public art, funded by the Mayors office & the City of Chicago, is a 500 square foot original artwork he conceived and created for the new Chinatown Library in Chicago. That project granted him inclusion in the historic art collection owned by the city with all the famous artists that have done major art pieces for the city of Chicago. His latest mural is a 1680 square foot installation piece for the Islamic Food & Nutrition Council of America in Chicago. He has created a mural for the Lincoln Square community of Chicago as well. Currently CJ is a Finalist for a new library in Chicago, a 10,000 square foot piece in the Phoenix International Airport, has an installation in the Pittsburgh Airport for 2020, been awarded a 40 foot by 17 foot wall in Elgin IL for 2020, and is a finalist for a mural at Texas State University.


Other works by Cj Hungerman