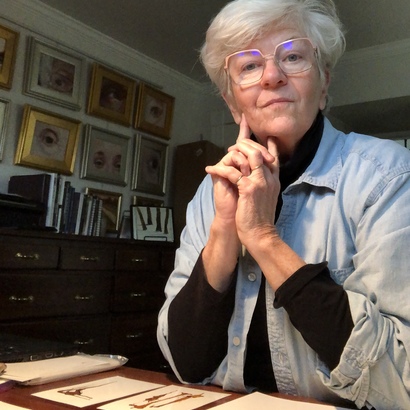 Christy also creates amazing abstract paintings with alcohol inks on a variety of surfaces. She says she has to surrender “control” of her medium to the muse, playfully allowing the inks to dictate what they wish to “say” to her, a bit of whimsy that belies the difficulty of working in a liquid medium on impermeable surfaces. These works have an enormous appeal to the casual as well as serious collectors of her art.

Someone once said, “We do not have souls; we are souls that have bodies.” Christy calls her work the “art of soul,” beckoning the viewer to observe that which is at once familiar and mysterious, comforting and unsettling. Christy says, “I paint souls! There is nothing like flesh draped over bones, wrinkling in crevices, stretching over muscles, reflecting warmly off itself, planes of light melting into shadows, defining and confining the soul that dwells within.”  Sawyer never pursued formal art training but began self-instruction in earnest in her 30's. She developed a significant art career soon thereafter, painting many portraits in the local community, including an admiral and several captains in the US Navy.   Upon moving to Missouri, Christy had the opportunity to pursue a passionate hobby that became a mini-career in video production. She hadn’t consciously intended to set painting aside, but that is, in fact, what happened. Seven years later the paints and the turpentine called to her again and Christy has been painting diligently for the last fourteen years, first as a charter member of The Foundry Art Centre in Saint Charles, Missouri, and then in a succession of public and private studio spaces. She has been the recipient of numerous awards in juried competitions and has artwork in private collections around the United States.

Christy lives in an historic home in Saint Louis, Missouri. She is also an accomplished studio potter and clay sculptor. Her potter/husband of 47 years passed away into 2018 leaving the ceramic studio solely in her care, but she decided that she no longer desired to make pottery without him. So, she has turned all her energy into painting which is her first love and calling.

After many years of learning, experimentation, and diligence, Christy has created a significant body of mature work, confident in style and vision.


Other works by Christy Sawyer