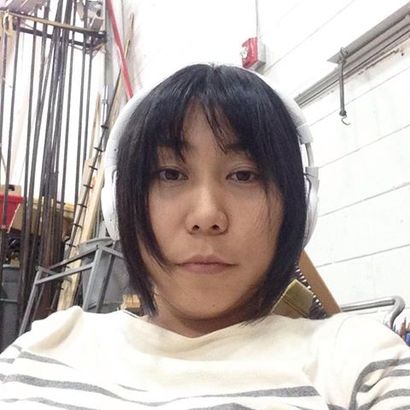 Born in Chiba, a suburb of Japan, near Tokyo, Chie Yasuda began her study of art in in Japan in a pre-college program. Inspired by Georgia O’Keefe, Ms. Yasuda later relocated to New Mexico, where she received her BA from the University of New Mexico, in 2007.

Art is the most powerful way to connect to others and, ultimately, the world. Ms. Yasuda’s art channels her deeply felt belief that Joy drives the world. By communicating joy through Art, abstracted into its purest form, Chie Yasuda touches something deeply and essentially human in each of us. Her art is joyfully cathartic, refreshing and inspire all who encounter her work. Ms. Yasuda’s unique perspective on humanness and joy through Art are undoubtedly influenced by her Buddhist beliefs and her personal approach to reaching out to others interested in embracing this deep and Universal philosophy and practice.

Ms. Yasuda’s work is improvisational, creating a visual jazz of harmonies and surprises through a variety of media, including ink, colored pencil, oil pastel and Japanese pigments. Like Jazz Chie Yasuda’s work is process oriented, created in the moment rather than from a detailed plan. She is driven by her fascination with interactions between the water, paint and paper, responding to the chemistry physicality of her media. The result is a palpable metaphoric “dialog” between artist and paint, realized on the surface of her paintings.

Ms. Yasuda is fascinated by both the beauty and the deep complexity of the world. She seeks to illuminate the beauty of everyday life in her work, by drawing careful attention to how very interesting one can find even the most banal things when one seeks a deeper understanding of their existence. For example, her “Supernova” series is inspired by the question “Where does life begin?” This has led her to research the births and deaths of stars, how “starstuff” allowed life to develop and supernovae as the distant and fundamental origins of the human species. In Ms. Yasuda’s Art, human Joy is an explosion that mirrors its origins in an exploding star. The awareness of the beauty of the Cosmos mirrored in the beauty within human beings made of stardust is a common philosophical thread in her Art.

Ms. Yasuda lives in Somerville, Mass., with her husband and son, where she is active in the local arts society. She regularly participates in the Somerville Open Studio program. 2015 Ms. Yasuda’s art peace was selected by city of Boston emerging art show.


Other works by Chie Yasuda