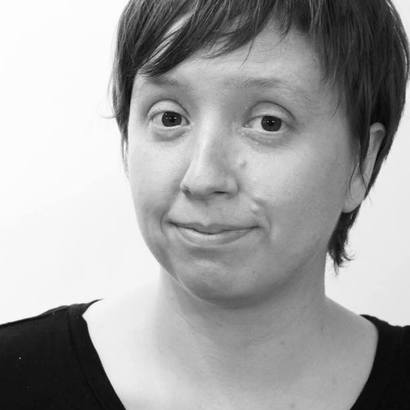 Carla Aspenberg was born and raised in New York City, and has lived and worked in Lawrence, Kansas for over a decade. She earned a BA in Studio Art from Bard College, and an MFA in Sculpture from Brooklyn College of the City University of New York. She has studied under Judy Pfaff, Elizabeth Murray, and Vito Acconci. Her work has been exhibited in venues such as the International Print Center New York, Brooklyn Public Library, Lawrence Public Library, Site:Brooklyn Gallery, Rush Arts Gallery in New York, Corridor Gallery in Brooklyn, Foundry Art Centre in Missouri, and Colorado State University. She has completed artist residencies at the Lawrence Arts Center, Pilchuck Glass School in Washington, Wilson College in Pennsylvania, and the Vermont Studio Center.

Carla creates drawings, sculptures, and prints, using accessible methods. She typically works with found materials, and her process is influenced by a movement called Arte Povera, where everyday objects are used to create works of fine art. She explores subjects such as patterns from nature, light, abstract landscapes, the physical body, and celestial bodies.

Growing up in New York, Carla found solace from the busy streets by frequenting museums and galleries. She appreciated the quiet and calm these spaces offered and dreamed of having a studio of her own, a meditative, reflective space. She had loved making art from an early age and knew that art would always be a part of her life. In college, she was able to major in art, turning it into a lifelong practice.


Other works by Carla Aspenberg