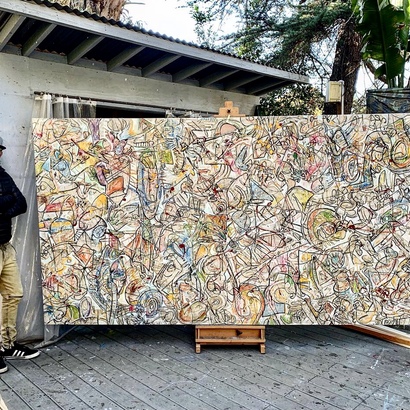 Bruce Rubenstein was born and raised in New York. He moved to Los Angeles in 1985 where he currently resides with his wife and two daughters.

Like most New Yorkers, Rubenstein is a brazen storyteller. Through his art he is able to communicate his inner most feelings. His large-scale, densely structured compositions defy categorization, blending abstract forms and biomorphic-organic shapes with subtle hints of figures and symbols resembling ancient Egyptian hieroglyphics or Asian calligraphy. His work resembles Abstract Expressionism, although the motives for his compositions differ philosophically from most Abstract Expressionist painters like Gorky, Arp, Tinguely, Miro and others of this ilk. Yes there are similarities of line and form. But it quickly becomes apparent that there are huge conceptual differences, that Rubenstein is not so much an abstract painter, but rather he just utilizes some of the same shapes as those painters. What he does with them is completely different, giving them dimension, making them look not like flat planes, but rather organic shapes.

Rodgers continues,”His artwork defies regional categorization, but frankly, that doesn’t mean as much as it once did. Rubenstein himself, despite his years in California, seems very much still a New Yorker. He has a kind of nervous edge that you see in people on the NYC subway platform, late for work with no train in sight. But this is an honest, open nervousness, based less on angst and anger, than on simply wanting to get where one is going and on wanting to be part of all that’s happening in that big, congested magical city”.

“Rubenstein is an artist, and that means someone who cannot restrain the flow ideas,” says art historian and critic David Rodgers. “He is someone who they just burst out of, who cannot help but communicate, and who sees no reason to stop. He’s a man not limited by media to communicate the stories that he needs to (and must) tell, through any medium he feels necessary.” In 1995, Rubenstein wrote a semi-autobiographical film about a struggling artist, “Bullet.” The film’s stars included Adrien Brody, Mickey Rourke and Tupac Shakur, all of whom are among Rubenstein’s collectors.!
!
When I asked Rubenstein for an explanation of what drives him, he responded without hesitation, “As a painter I strive to express myself as a spiritual being. When I work I feel connected to the universe and everything in it. I don’t really spend a lot of time contemplating subject matter and/or composition. I’ve been a serious painter for many years. I’ve learned to trust myself, to trust my instincts, and above all I’ve learned to be patient. I become a vessel to something greater than myself. Inevitably the painting will reveal itself. Piece by piece. Layer by layer. Until it is complete. Then the process starts all over again. This is the circle of Life. Or at least the circle of an artist’s life…”

Investigating further into his work, many more objects in different media seemed to emerge and unfold like sudden flowers assemblages, collages, three-dimensional wall hanging pieces. Now, even more, was happening! With these additions to the oeuvre, these other creative objects to consider, the idea of using a particular medium to reference his work was utterly undermined. But instead of feeling confused about this struggle to analyze his work, I started to feel free. Much freer! What’s more freeing to see than an artist putting many different media to work, throwing out ideas, sending them leaping around, circling in the air above his head, dancing like birds as they flutter in the blue sky and fresh air? Then, suddenly, I had an answer. At last, in a video interview with him, he said so very casually the one thing that made it all click for me: that each of his works is a story. This is as simple and basic as it gets. This is what made superfluous all the analytical gyrations.

He laid it out, and it became clear. Forget the overanalyzing. All that has to happen is this: we sit down in the chair where we belong, Rubenstein the storyteller stands up in front of us, and in his New York accent, begins the telling of tales. He begins to weave his associations, connections, evocations, as only a true storyteller can. What’s more natural than tales told among one’s fellow humans? Like with the neighborhood guy you always run into by the deli on the corner, in any of hundreds of neighborhoods in Brooklyn, the Bronx, or wherever, who grabs you for his audience and won’t let go, this is the face-to-face storytelling encounter. This is the part of New York that is so inherent, (and not always easily encountered in California), which is in the deepest part of Rubenstein’s makeup. Of course, the stories emerge not just from his two dimensional wall works. He probably has rooms full of sculptures somewhere that he doesn’t let just anyone see; those are some very special stories, and you have to be ready. And even more adventures beckon, at night in the City. Imagine screenplays? Oh, sure, he has…

In fact, in 1995, Rubenstein wrote a semi-autobiographical film about a struggling artist called “Bullet,” which starred Adrien Brody and Mickey Rourke, both of whom are among his private collectors.

One filmed sequence of his involves the artist, Ruby, portrayed by Adrien Brody, rappelling off the side of a building in the middle of the night to paint a huge piece of artwork on its windowless flank. (Our storyteller will gladly make this daring extra effort to tell you this particular story.) In the film, when the police arrive to enforce their categorical legalizations, compartmentalizations, and limitations on his process, Ruby refuses. High above them, out of reach, he just climbs back up his rope to the top of the building and gleefully waves a middle finger at the frustrated and helpless officers down below, before disappearing behind the parapet….. That’s the image of The Storyteller Bruce Rubenstein that I like the best. He is an Artist, and that means someone who cannot restrain the flow of ideas. He is someone who they just burst out of, who cannot help but communicate, and who sees no reason to stop. He’s a man not limited by media to communicate the stories that he needs to (and must) tell, through any medium he feels necessary. When I kept encountering more and more of the styles and layers in his work, two names came to mind: Gerhard Richter and Pablo Picasso. Like them, more media only gives him more and more opportunities to communicate and tell his stories. He is like this because he just can’t help it. His paintings are so large and unrestrained because the stories are larger-than-life. He can’t confine himself to small canvases or the sides of small garages. He needs the whole wall of the whole building. The world is so big for him; he’s got to communicate all of its size and complexity. And looking at mere photos of his work seems far too limiting, for they are inadequate to convey the massive words and stories that tumble out.​

Maybe the only solution is to just get a plane ticket to Los Angeles and go look him up at his studio and see the work in person, experience all of it. But knowing Bruce, when you get there, he might just be temporarily missing from his studio, maybe out in the middle of the Mojave Desert with a new collection of bulldozers and earth moving machinery, carving shapes into the Earth, since he feels he has stories to tell about moving the Earth around. Good, I hope so. Or maybe it’s the Earth that’s telling him the stories. Either way, because I’d be happy to wait there at his studio door for him, with a cold beer or two for when he gets back…

Bruce Rubenstein is going to have more stories to tell, after all…


Other works by Bruce Rubenstein