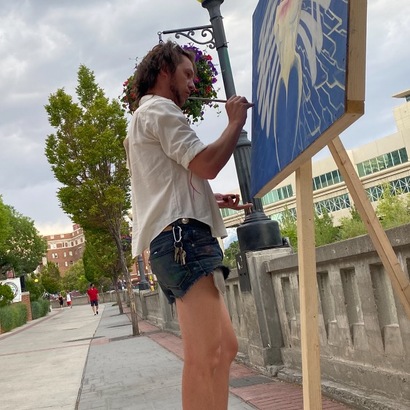 Asa Kennedy is a self-trained mural artist and fine arts painter who handcrafts his own custom-shaped canvases. A true student to his craft, Asa is proud to paint freehand, never taping off lines, never using projection or gridding systems, never painting from photographs, and always referencing his own illustrations to create his work. It is entirely a paint to surface technique he developed over the past twenty years. Asa's surreal abstract style is meant to encite curiosity and open the imagination of the viewer. The inspiration to do so comes from growing up the the Southwest where the majesty of the landscape changed color at least twelve times a day. Common themes of his work present a relationship between nature and the industrial world.

Asa is a committed mural artist in many aspects. He works closely with clients to achieve their visions by engaging with stakeholders and listening to the needs based in a specific project. He has been approached by the City of Reno to complete contracted works, and recently partnered with a local non-profit to paint a Day of the Dead themed mural which was awared an Art Belongs Here grant by the City of Reno. Asa's dedication to mural painting drives him to follow a tradition of community involvement. He has led youth-oriented teaching projects, has worked closely with community volunteers, and has mentored other artists, all on large scale mural projects.

This well rounded approach helps Asa to achieve his goal of placing art in front of a wied and diverse audience. He has fun solving the creative problems that arise in fitting artworks to respective environments. He has a blast executing the painting process.