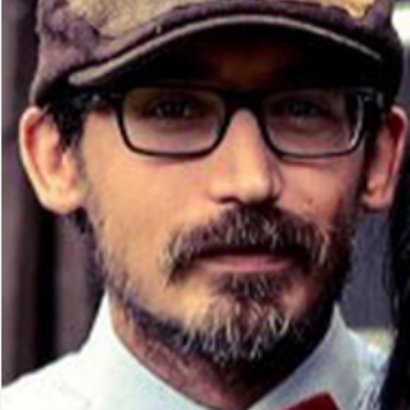 Anthony Ruscitto is a painter and printmaker living and working in Schenectady, NY. He was born on June 7, 1985 in Florida to parents working in the horse racing business that took them to various states on the harness racing circuit. By 1990 his family hung up their riding crops and settled down in the sleepy village of Scotia, NY.

From an early age Ruscitto loved to be creative. He grew up watching PBS shows like New Yankee Workshop, This Old House, and The Joy of Painting. Throughout school he took a special interest in the visual arts. He would often get in trouble for drawing pictures during class and would escape to the art room whenever possible. He was discouraged from applying to college art programs, but continued his studies independently. He would often make trips to the book store to learn more about art and artists. It was around this time his stepmother admonished, “If you stopped wasting your money on paint you could have had a house by now”. Despite the discouragement, he still felt the need to create. (Update: he did buy a house, and can still afford to buy paint, or make his own paint on a recently purchased three-roll mill.)

In his early twenties his work tended toward the figurative, whether screen printing or figure painting. However, he experienced a watershed moment upon discovering the work of Jonas Gerard. He was fascinated by Gerard's use of color and ability to convey motion in his paintings. Ruscitto would study Gerard's videos and use what he learned as inspiration for his own paintings and monotypes.

Fueled by this revelation he took a special interest in the abstract expressionism movement and began an online course offered by MoMA. He used what he learned from that course, along with inspiration from artists such as James Nares and James Austin Murray, to create paintings that play around with movement, technique, and color. Many of his prints and paintings also draw inspiration from the world around him. The way forms intersect, how light is reflected from objects, or how objects break down to simple shapes and colors when he removes his glasses.

His creativity doesn't just happen on the canvas either. Often times he makes his own brushes to create new and exciting effects. He is also an award winning woodturner, and amateur paint/lotion/candle/lip balm/soap/pickle and mess maker.