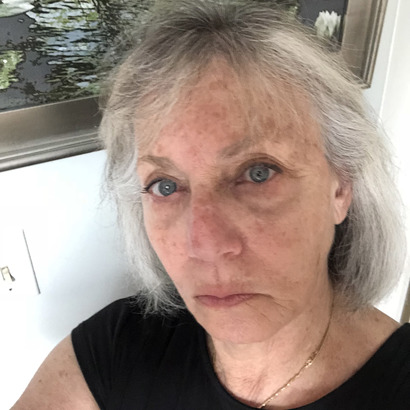 Art Is a window to another world and the artist creates that vision. Some people work in the garden, Annette invents it. Utilizing assorted cameras to capture her surroundings she then collages pieces of photos into a scene using photoshop tools as her brush. Taking an ‘as is’ photograph does not resonate with her, she must add texture, color, or her own components. With the advancement of technology that has occurred since she began her art career she now incorporates various tech modes as a computer, iPhone and photoshop to create art. As a trained oil painter she incorporates that sensitivity and style into her digital work.

She will explore a particular theme, then move on if It starts to become too familiar .When working on a computer becomes taxing she then moves over to collage work. Painting cutting and gluing pieces of color she has created. Her pieces consider form, color and texture and the blending of the three. One discipline is sitting down, the other physical. One form inspires the other. Many of her collages focus on trees in an abstract way. Trees represent many symbolic aspects such as renewal, beauty, strength, stability etc., A widespread symbol of the tree is the “tree of life”. It’s body rooted in earth with its crown dancing in the sky. Trees hold so many design qualities from the trunks to the branches. From a solitary tree to a forest.

Born in Paris, France, Annette’s family immigrated to the US when she was a young child. She was brought up in Brooklyn NY where she resided into her adult life bringing up a family on the sea coast of Brooklyn. About 15 years ago she moved to the beautiful Hudson Valley in mid state New York enjoying no traffic reports and surrounded by glorious nature. She has been creating and changing what is since she can remember.

From the age of 12 she was classically trained in oil painting by Anthony Trujillo, a Spanish painter. At at 16. she took life drawing classes at Parsons School of Design. She received a BFA from Pratt Institute, majoring in painting and minoring in jewelry making. As a career she was a costume jewelry designer for manufacturers in NYC and Providence, Rhode Island whose clients were various department stores. Many years later she began studying watercolor painting with Staats Fushold, Classes in computer arts have moved her forward into digital art work.


Other works by Annette Jaret