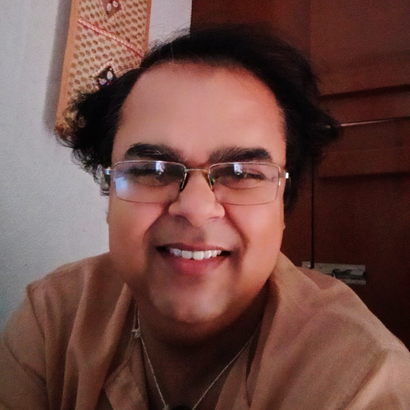 Amar Singha was born and brought up in a baronial family of north Bengal. In his childhood, he got colored pencils, crayons, and drawing sheets to avoid his loneliness. Behind the royal flamboyance, he had a lot of curiosity, which he tried to put down on the drawing sheet. That childish game is now dressed as a meaningful craft of his life.
Having a long journey in the world of painting, his style has been running with several changes to reach out to the destination that can speak about his inner-vision profoundly. Based on the structural perspective, his painting followed synthetic cubism. Later it becomes standard in the Indian approach. Rather than passing in the Indian two-dimensional trend, the tenderness of light and shadow brings his thoughts back to life. The use of the lines shows the eternal idea of the Indian drawing, which he owns as required. From the grammatical perspective, his painting followed the Indian custom and in the framework of the ritualized Indian grammar, Amar configured the western ideas. The flows of two different Ideas came into the key-point, which help him plan the composition. The masterpieces of the ancestor Indian artists inspire him to move forward.
The affection in the human being that came from the experience of his past spiritual life reflects on canvas in several ways. The insignificant thing of life being, he loves to represent significantly in canvas by adding the value of torment, joy, and aspiration. With the specific color and characteristic value, his abstract form becomes lingual, which speaks about the meaning of our journey.


Other works by Amar Singha