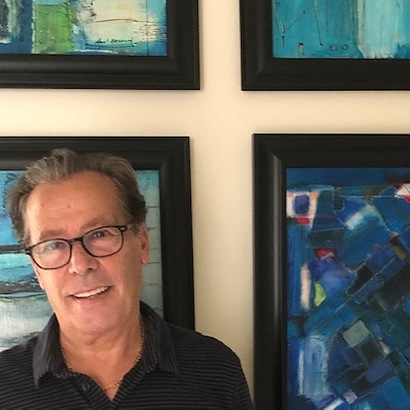 Born in Rabat Morocco, Amal Hassani has been painting since adolescence.  He traveled to Paris to learn more about the “Abstract Expressionism” movement that began in the 40’s. He was influenced by the works of Georges Braque, Paul Klee, Wassily Kandinsky, and others.

From Paris he was drawn to Tangier, Morocco, which had been a favorite of writers like Jack Kerouac, poet Allen Ginsberg and other bohemians of that era. The “hippie movement” was taking shape and he wanted to paint his part in it.

He exhibited in galleries and other venues around the country. In 1974, under the patronage of the Minister of Cultural Affairs, he had his first solo exhibition of contemporary art pieces which sold out. Some of his patrons included the Governor and the Vice Governor of Tangier along with other members of the Legislative Assembly.

His work has been collected by fans from different parts of the world, including Italian actress Veronica Lazar, French actress Stephane Audran, guitarist Ronnie Wood, along with many others.

He moved to Tampa, FL in 1993 where he still resides and paints today.


Other works by Amal Hassani