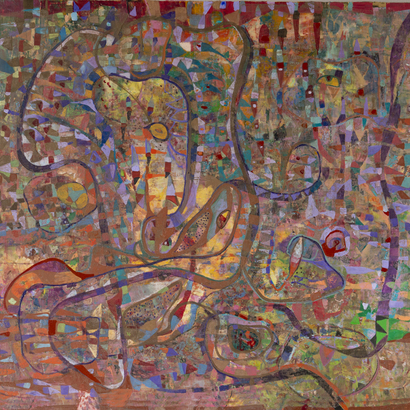 Alise Loebelsohn graduated from Pratt Institute with a BFA in Painting. She studied in France and at the Art Students League in NYC. While at Pratt Alise studied under Professor Mary Buckley. Ms. Buckley ran an organization that created murals in hospitals and mental institutions in deep need of beautification. with technique and process.

While still in college she proposed and created a 132’ long fish mural on the boardwalk in Coney Island. At first she wasn’t taken seriously, but with the backing of Dewey Albert (from Astroland Amusement Park) the Aquarium eventually gave in.
She then worked at Evergreene Painting Studios for several years, travelling and executing large outdoor murals mainly for the Architect Richard Haas. One job included stenciling the Old Executive Office Building at the White House for over a year.
From 1987-1994, Alise worked as the only female billboard painter in the union in NYC. While there she painted the DKNY ad on Houston Street. She worked in Times Square and on numerous highways around the city doing lettering, painting very large faces and many beer bubbles. She learned how to copy photographs on a large scale as well as transfer designs.
When billboards were becoming more computerized she switched to another union focusing on decorative painting. She worked for Creative Finishes for 6 years working mainly in the large stores on Fifth Ave. like Bendels, Bergorf Goodman, Nike town and doing finishes such as Venetian Plaster, gold leafing and murals. She also did several murals at Yankee Stadium and all the lettering and signage.
In 2001 she started her own mural and decorative painting company called Pompeii Studios LLC. Pompeii has been hired for a diverse range of commercial, corporate and private homes including the Jonathon Woodner Housing Complex, Washington Square Hotel and Bryant Park. She is now working at The Pierre Hotel in NYC.
Alise always worked on her own paintings. She just returned from showing her work in Art Basel, Miami in the Aqua Galleries. She shows her work with Spacewomb Gallery in the lower East Side. She recently showed at the Affordable Art Fair with the Julio Valdez Project Space. She is currently in a Show titled Concrete in Los Angeles. She will be showing work next month at Prince Street Gallery. She won a contest to have a one person Show at the Greenpoint Gallery in the Fall. She wishes to continue exploring surfaces using layers of plaster, mica powders and waxes.

She wishes to take her experience in the decorative arts and use it to pursue her own personal vision. She works because it heals, focuses and inspires her. She chooses theme which are simple and easily understood. She hopes her work will resonate with others.


Other works by Alise Loebelsohn